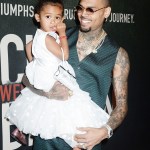 Ammika Harris looked absolutely flawless in a new snap she posted to her Instagram account, featuring the model rocking red lingerie from Lounge Underwear just over one year after giving birth.

Ammika Harris was ready to ring in the holidays with a totally sexy vibe in her latest post to Instagram. The model, 27, took to her IG on December 13 and posted a hot new photo featuring herself in red lace lingerie designed by Lounge Underwear. Ammika struck a pose for the camera, putting her fit figure on full display. She also paired the look with an oversized gray shirt, which draped effortlessly on her arms.

The mother-of-one, who shares one-year-old son Aeko with former flame Chris Brown, 31, had her makeup done to total perfection in the photo. Her hair cascaded down her shoulder as it was tossed to one side, as well. “Santa baby,” Ammika captioned the image, tagging Lounge Underwear. Ammika looked truly incredible in the photo, taken just over one year after she and Chris welcomed their precious baby boy.

The parents recently returned to their respective homes after reuniting in Tulum, Mexico, for a family getaway that also included Chris’ six-year-old daughter, Royalty Brown, and his mother, Joyce Hawkins. The little family spent a lot of quality time together, and Chris and Ammika even celebrated Aeko’s first birthday on November 20 in the gorgeous setting! Of course, the pair’s reunion has sparked interest among fans — does it mean that there’s a romantic future for Ammika and Chris?

“Chris and Ammika haven’t put an official label on where things stand with them right now because they’re still trying to figure out what their next move is,” a source shared EXCLUSIVELY with HollywoodLife at the end of November. “They know the love is there and they’ll always be in each other’s lives obviously, but there are so many variables at this point and everything is still up in the air.” Chris and Ammika appeared to have a great time on the trip, given the sweet social media posts fans were able to glimpse on their respective platforms.

Prior to their trip, the two reunited in London roughly one month before the Thanksgiving holiday, which Ammika and Aeko celebrated by wearing matching pajamas in the photo above. As for what the reunion could mean for Chris and Ammika’s future, another source reiterated to HL that the young parents are simply taking their time. “If it remains romantic or moves to co-parenting then that is what it will be,” a source revealed. “Chris has so much respect for Ammika, and he would love to make it work, but he’s well aware that life will take things the way it does.”