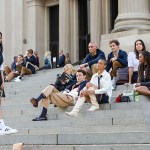 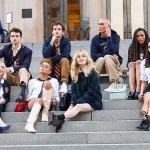 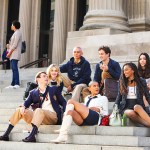 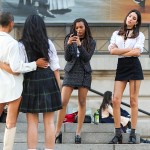 Hello, Upper East Siders. The new cast of ‘Gossip Girl’ has arrived and taken over New York City. The stars were spotted filming on the steps of the Met, just like the OGs did back in the day.

The world of Gossip Girl is expanding, and the steps of the Metropolitan Museum of Art are coming along for the ride. The new cast of Gossip Girl was seen filming on the steps of the iconic museum in the Big Apple on Nov. 10. Complete in their prep school uniforms, cast members Eli Brown, Emily Alyn Lind, Thomas Doherty, Evan Mock, Zión Moreno, Jordan Alexander, and Savannah Smith lounged on the iconic steps, stirring up drama most likely.

The steps of the Met figured prominently into the early seasons of Gossip Girl. It was Blair Waldorf’s go-to spot in her high school days. The stairs were a symbol of power, and if you weren’t next to Blair on the steps of the Met eating your yogurt before school, then your place on the social hierarchy was lacking. Blair’s influence is clearly felt in the new series. The Met steps are the place to be if you’re a teenage Upper East Sider.

The new Gossip Girl series recently started filming in New York City after production was delayed due to the COVID-19 pandemic. Eli and co-star Whitney Peak were spotted filming scenes together on Nov. 5. Whitney looked super glam in a silver metallic dress.

The reimagined drama will focus on a new generation of New York private school teens being introduced to social surveillance 8 years after the original blogger’s website went dark. The series will explore just how much social media has changed the world of Gossip Girl. Gossip Girl’s use of technology was considered cutting edge when it premiered in 2007, but the social media explosion has taken things to a whole new level in recent years.

As for whether or not original cast members Blake Lively, Leighton Meester, Chace Crawford, Ed Westwick, and Penn Badgley will reprise their roles in the new series, that remains to be seen. “We’ve reached out to all of them to let them know it was happening and we’d love for them to be involved if they want to be involved, but certainly didn’t want to make it contingent upon [them being involved],” co-creator and executive producer Josh Schwartz said at the 2019 TV Critics Association summer press tour.

Kelly Rutherford, who played Lily van der Woodsen in the original series, told HollywoodLife EXCLUSIVELY that she would “love” to be a part of the new series. Kristen Bell will be returning as the iconic narrator. The reimagined Gossip Girl is set to premiere on HBO Max in 2021.