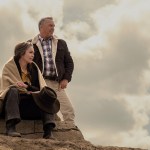 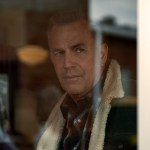 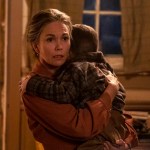 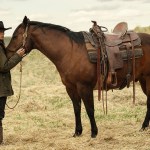 Booboo Stewart stars in the western thriller ‘Let Him Go’ as Peter Dragswolf. HL spoke EXCLUSIVELY with Booboo, who revealed he lost 20 pounds for the role and what he learned from Kevin Costner and Diane Lane.

Booboo Stewart is part of the stacked cast of Let Him Go, which hit theaters on Nov. 6. He stars as Peter Dragswolf, a young man George and Martha Blackledge encounter as they fight to rescue their widowed daughter-in-law and grandson from a dangerous family. Peter welcomes the couple into his small home and helps them out when they need it most.

HollywoodLife talked EXCLUSIVELY with Booboo about why the role of Peter Dragswolf was such an important role for him to play. The actor did some intense research for the role and also lost 20 pounds as he continued to explore Peter’s “isolated” life. Booboo noted working alongside Kevin Costner and Diane Lane is something he’ll “treasure” forever. Read our full Q&A below.

What drew you to the role of Peter in this film?
Booboo Stewart: It’s a lot of things, honestly. I mean, of course, the cast. Thomas [Bezucha], our director, is incredible. Just within the first 10 pages of the script, I was like, this is awesome. I want to do this. The opportunity to play Peter… I really loved that character and the opportunity to give people who’ve actually been through what Peter’s been through a voice.

Are you familiar with the outdoors and with horseback riding? Or was that something that was really new to you?
Booboo Stewart: I grew up on a ranch. I’m actually here right now. I’ve been around horses my whole life. I have a horse. His name is Rimrock. He’s a pink quarter horse. And yes, I was actually really, really excited that I got to ride a horse in the movie. I wanted to ride more. Hopefully, I get another role where I get to ride horses all the time.

How did you get in touch with your character?
Booboo Stewart: I just dove into what I knew about Peter’s past. They were taking natives out of their communities when there are kids, putting them in these boarding schools called residential schools, and trying to strip them of their culture. The means and how they did it was very abusive and caused a lot of trauma to a lot of kids and a lot of families. I did a lot of research into all the residential schools, which happened from the late 1800s to the 1980s. It’s just crazy that people don’t know about this horrible thing that happened. I did tons of research on that and just tapping into
the trauma and the abuse in the experience from that and then letting that unfold. That’s the reason why he doesn’t live in town. That’s the reason why he lives by himself. That’s why he’s isolated, why he’s so hesitant when strangers come around. It’s just him and his horse. I wanted to create something physical about him too, so I lost 20 pounds. Because I felt that living out there by himself, he just lives off of some canned food. Every once in a while, he goes into the city. Aside from that, meat is very hard to come by, so he just hunts whenever he can get something hunting, which would probably be something small anyway. It’s just all those things combined kind of gave me a grasp on who Peter is. There was a lot of deep diving into what happened in residential schools, and then taking people’s stories and kind of building Peter’s story.

You lost 20 pounds for the role? How did you do that?
Booboo Stewart: A lot of cardio and just taking in a very small amount of calories each day and trying to burn as many calories as I was taking in. Actually, one of our producers and Tom, our director, had told me at one point, okay, don’t lose any more weight. This is it. This is looking too skinny. Also, putting yourself into that kind of mental state for me helped a lot with portraying Peter, his sense of surviving.

Peter lives a very lonely life. Until Margaret and George come along, it’s usually just Peter and his horse.
Booboo Stewart: It’s a very different way of life and isolated existence. It’s lonely, but at the same time, he’s found strength in it. It takes a lot of courage and strength to continue after you’ve been through so much trauma. So to me, the fact that he is surviving this and determined to do it on his own, there’s so much strength to be found there.

You have two amazing co-stars with Kevin Costner and Diane Lane. What was it like working alongside them and learning from legends?
Booboo Stewart: Literally, I just wanted to be a sponge. Kevin Costner probably thought I was weird at times, but I was trying to be around him. I just wanted to learn, even if he wasn’t talking to me directly, I just wanted to hear what he had to say about the scene. I wanted to know what his thoughts were, And then with Diane, too. She’s such a strong force and a very strong person. I learned a lot from her in that sense, her just being strong. If you need something, if you feel like you have to say something, if you have any questions to ask so the scene can be better, you have to do it. That was something she taught me, and I learned from watching her work. Don’t be afraid to speak your mind. If you have a question, ask it. It was just little things like that. You just don’t want to be in the car ride home being like I could have made it better. I just learned so much from them. Kevin is such a nice person. They’re both so nice. It was freezing and Kevin had a car there and he’d be like, “Come on, get in my car.” He would play me music, and I would just talk about stuff. My dad and sister would come to set, and he invited us all into his trailer. He showed behind the scenes footage from a past movie. He was just so nice. Some memories I’ve locked in my brain I will treasure for the rest of my time for sure.

Recently, Julie and the Phantoms was released and became a huge hit. How did it feel to reunite with Kenny Ortega on something completely different from Descendants?
Booboo Stewart: He’s another person where whenever I’m on set I just want to hear what he has to say, what he’s thinking about things, how he directs people, the words he chooses to use. Kenny’s an extremely thoughtful person. I learned so much from him from the past 6 years or so working together. I have to say, every time I work with him, I get more comfortable as an actor. I’m obviously older, so I feel like I take more time to listen and actually retain it. I just want to keep working with him so I can keep learning. I love Kenny. He’s my younger sister’s godfather. He’s a family friend now, and I hope we get to continue to create work together. It’s always fun. He’s so collaborative. He listens to everybody, but at the end of the day, he knows what he wants. He makes the final decision, which I really love. He’s just great. I really love Kenny a lot. The whole cast of that show is so much fun. Selfishly, I just wanted to go have fun with everybody.

Fans are very much on board with the connection between Alex and Willie. If there were to be a season 2, where would you want to see that go?
Booboo Stewart: I would love it to develop into a full relationship. I think that would be incredible. I’ve heard the response to their connection has been so, so amazing. People have told me that they’ve heard stories of people coming out to their families because the show and the characters gave them the strength to do so. I would love to dive deeper into that but also dive deeper into the relationship that Willie has with Caleb and their history. Why is he Caleb’s errand boy? What ties him to Caleb? Because if we dive deeper into both of those, then there’ll be more conflict in the center, which is always fun.