Clare Crawley revealed that she didn’t attend her high school prom on the Oct. 20 episode of ‘The Bachelorette,’ which one fan tried to prove otherwise with a throwback photo. Clare clapped back — and so did Nick Viall!

A fan attempted to fact check Clare Crawley’s claim that she didn’t attend her high school prom — which led The Bachelorette star to fact check right back! On the Oct. 20 episode of The Bachelorette, Clare revealed to contestant Chasen Nick that she had missed out on the teenage milestone. “I didn’t have the greatest high school experience either, to be honest. I never went to prom. Nobody ever asked me. Nobody even knew who I was in high school. I was just invisible, I think. I felt invisible,” Clare said in an attempt to empathize with Chasen, who was bullied when he was young.

Then you need to chill. 3) This could be a pic from any dance that’s not prom 4) maybe Clare had to ask this guy, because he was too scared to ask her 5) and maybe Clare technically lied and which case.. who cares 6) everyone reading this has lied about stupid shit

After watching the episode, a Bachelorette fan tried to insist that Clare actually went to prom. The fan shared a throwback photo of two people posing at a dance, and claimed that the blonde girl in the picture was Clare in 1999 (with the boy being her husband). “My husband took @clarecrawley to senior prom, @clarecrawley you went to prom,” read the caption, according to a screenshot that blogger Steve Carbone (AKA Reality Steve) shared on Twitter on Oct. 21.

The screenshot also included Clare’s clapback to the fan’s post! “Lol actually not. You do know there is more dances in high school that are NOT prom? Turns out it’s just someone digging up old photos. (Why she keeps her husband’s old dance pics I’m not sure [woozy face emoji]),” Clare commented. The hairstylist added, “I went to a new school senior year and in fact DID NOT go to prom just like I said.” 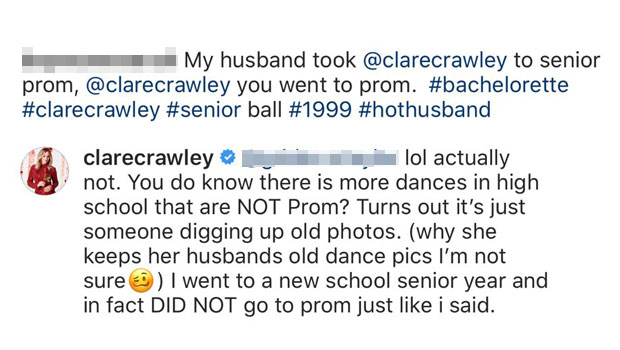 Even a former lead on The Bachelor, Nick Viall, defended Clare in this scandal that has now been dubbed “PromGate.” In a series of tweets, Nick wrote, “PromGate…A thread. 1) If you want to playfully snark about this pic of Clare at a high school dance…Cool, It’s a silly fun show that is silly and fun to discuss. 2) If you’re looking at this photo and making blanket assumptions about Clare’s character ….Then you need to chill. 3) This could be a pic from any dance that’s not prom 4) maybe Clare had to ask this guy, because he was too scared to ask her 5) and maybe Clare technically lied and which case.. who cares 6) everyone reading this has lied about stupid s–t…And we have no idea why we do it. Stop Dming Clare, stop harassing her in her comments, chill out. Enjoy the show. This is meant to be fun. 2020 you’re exhausting. Clare.. thank you for the silly fun entertainment.”

Season 16 of The Bachelorette just kicked off on Oct. 13, and already it’s stirring drama — both on the screen and off-screen, as you can see! One of the suitors, former professional football player Dale Moss, is causing a buzz for catching Clare’s attention right off the bat. He even received her first impression rose during the premiere!

And while Clare has a heart-to-heart about prom with Chasen in the most recent episode of The Bachlorette, Dale once again had fans thinking that he’s the one winning Clare’s heart after they both confessed their feelings to one another. “I want you to know how much, even this early on, I totally have feelings for you,” Clare told Dale on Tuesday’s episode, to which he said, “I feel the same way, I’m not going to lie.” No liars here!