America Ferrera will return as Amy when season 6 of NBC’s hit comedy, Superstore premieres on October 29! Despite her announcement last February, in which she revealed she’s leaving the show after season 5, America will appear in the first two episodes of season 6. Her return comes after season 5 was cut short due to the COVID-19 pandemic, which left Superstore fans with only one-half of the show’s two-part finale. Therefore, America’s return will allow her to bid farewell to her character, as previously planned, which co-star Lauren Ash couldn’t be more thrilled about!

“America is back for the first two episodes of season six, so we get a little taste of her. Luckily, she’s gonna be back and able to kind of tie up some of the things that were the groundwork that have been being laid in those last episodes,” Lauren, who plays Dina on the show, told HollywoodLife during our exclusive interview.  Lauren, who just launched her new podcast True Crime & Cocktails (today, on October 13!), that she hosts with her cousin, Christy Oxborrow, understands that fans were worried when the show abruptly ended on a cliffhanger, but she’s ready to assure them that the best is yet to come.

There's a lot to unpack here. #Superstore is back in business Thursday, October 29 on @NBC. pic.twitter.com/PjnF7puHbH

“I know people were very concerned about how we would play out [after the shutdown] — you know, America’s storyline and stuff like that. I can assure people that this is a luxury that we’ve been able to have a couple more [episodes] to really kind of tie up that story nicely,” Lauren explained about Amy’s exit.

While reminiscing about Amy and Dina‘s friendship, Lauren revealed where she’d like to see them end up — hypothetically speaking, of course. “I just feel my favorite episodes of the show are ones where we got to see them kind of as a duo,” she said, recalling “the shoplifting episode” for Super-fans.

“I think long term, what would be great is if I could do my own spin off in a world where anything is possible. It would be, them [Amy and Dina] as a crime fighting duo that they all of a sudden stumble upon some sort of crimes or something, they manage to solve them, and then they kind of start like a side detective business,” Lauren explained, admitting, “That, to me, is the spinoff I think everyone would like to see!”

Since the Superstore world is set in our world, the new season will address the global health crisis, where the Cloud 9 staff is forced to deal with coronavirus protocols. “It would be extremely bizarre if we went into a season of Superstore, ignoring what’s going on in the world right now,” Lauren said before she went onto explain that season 6 will heavily honor healthcare workers.

Related: ‘Sisterhood Of The Traveling Pants:’ See Then & Now Pics Of Gorgeous Cast On The Film’s Anniversary

“For the past 6-7 months, we’ve been really relying on people that work in stores, much like these characters [at Cloud 9]. The essential workers, as we all know, have truly become the heroes of this pandemic, allowing the rest of us to get food and supplies and shelter. And, the people that we portray on this show, in real life, those people really did risk their own health and lives to continue to work in those ways. So, I’m very excited to get to reflect,” Lauren said, noting, “I feel like we’ve really captured a lot of what that the world is like. Also, we bring some light and some laughs in a world of darkness, because obviously there’s lots of things that we can relate to that have gone on over the past seven months. We can all have a good laugh at seeing these characters exploring that,” she quipped. Further elaborating on season 6’s COVID theme, Lauren revealed that masks are “definitely” a part of the show. “It’s been interesting, kind of like trying to find how to do that and the moments where we need them.” 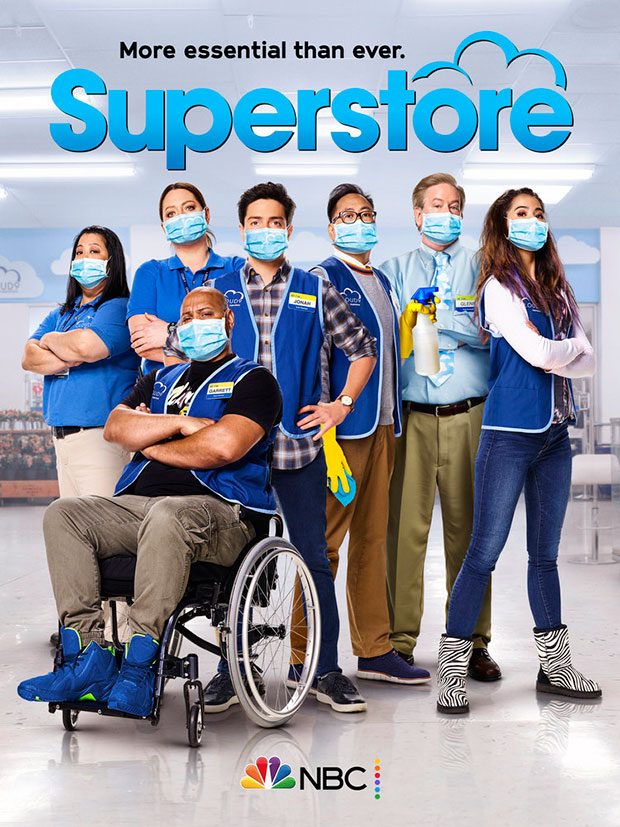 Read more from our exclusive interview with ‘Superstore’s Lauren Ash, below:

How different has filming been during the coronavirus pandemic?

“We’re slower than we normally do because we’ve got a lot of new kinds of protocols [due to COVID-19]. But, it’s really been going well, and I feel very safe, which is great. Obviously, our show is known for tackling a lot of things that you know people deal with in this country and in the world. I’m excited to get to kind of see this new world through the lens of these characters that we’ve gotten to know so well for the past five years. The Superstore world is our world, so that’s kind of been helpful for us, for sure. So I’m really excited about what we’re doing in the episodes and for people to get to see them and to have some new content back on TV, because I know that people are reaching for it.”

Will Amy and Jonah (Ben Feldman) get a satisfying ending?

“Oh, God, this is such a hard thing to answer. But, what I will say is that, obviously we were there and there was a huge set up in the last episode that we saw. We saw that, and she accepted this job in California. And Jonah had decided to move to California with her, right. So, I will say that that is not going to be glossed over or forgotten and, remember, we have two episodes with Amy in them. This is what I can’t stress enough. Don’t panic. Trust them, they will definitely be addressing it.”

Is Dina’s boyfriend slated to come back in season 6?

“Well, here’s the deal, I can tell you that we don’t get the scripts very early, so I’ve only seen the first episode. But, what I can tell you is that he definitely hasn’t disappeared. He is referenced. And the hope, I think, always, is to get to see him again. So, I really hope that we get to see him and he’s so funny. And, I loved getting to play those scenes with him last season. So, he’s not going away. Let’s put it that way.”

Tell us more about your podcast!

“We’re cousins by birth, sisters by life [talking about her cohost Christy Oxborrow]. I say that she’s my chosen sister, which is always nice, as I’m an only child. We’ve been very close and we had this idea. — ‘Oh, my gosh. Why don’t we do an entire podcast devoted to the Netflix Unsolved Mysteries series?’ So, the first season of True Crime & Cocktails deep dives into the Netflix series. The cool thing is, my cousin Christy is this amazing researcher, and she has managed to find this new skill, and she gets the craziest info. It’s just like I’m like, I can’t believe that they don’t include some of this stuff in the Netflix episodes. She always makes sure to cite multiple sources, like a real investigator would. It’s been really fun to kind of do something that’s fun and different for me and silly and it’s been really a good time for the both of us. I’ve been into true crime since I was a kid. She’s really bringing the research and I’m really bringing kind of the color commentary. We’ve both just gotten totally sucked into this world that now it’s like all we talk about. We shoot at night in matching pajamas, drinking cocktails, so I’m really excited for people to get to listen.