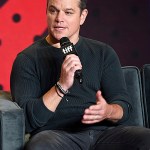 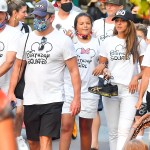 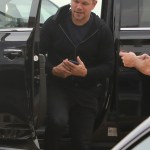 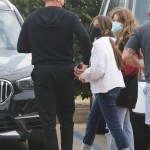 Matt Damon’s the proud owner of a mullet and wild beard — at least while filming ‘The Last Duel’. He was spotted with the drastic new look while hanging with Jodie Comer on set in Ireland.

The Last Duel is an intense drama, but Matt Damon‘s hair for the middle ages-set film is downright hilarious. The actor, 49, is sporting a shaggy, curly mullet — much different from his usually cropped style. Another major difference? Matt is rocking a grey-ish beard on just his chin and neck. It’s a… look. The Oscar-winner’s costume was revealed in new photos taken at Cahir Castle in Cashel, County Tipperary, Ireland, where he was spotted strolling with co-star Jodie Comer.

Matt, who plays real life knight Jean de Carrouges in the Ridley Scott-helmed film, returned to the set on September 28 after production halted due to COVID-19 restrictions. The rest of his costume consisted of a fur-lined velvet jacket with a floral pattern, and a brocade shirt. Jodie, 27, who plays Matt’s character’s wife Marguerite de Carrouges, also has a unique hairstyle, albeit one that’s period accurate. She’s rocking Princess Leia-esque braided buns on the sides of her head decorated with small jewels.

The Killing Eve star wore a fur-lined burgundy poncho over a yellow silk gown. Keeping themselves safe during the ongoing pandemic, both Matt and Jodie had protective plastic face shields while not filming. Matt was actually stuck in Ireland for a period of time at the beginning of the coronavirus lockdown due to travel restrictions to the United States. Eventually, he made it back to the United States, where he reunited with his wife, Luciana Barroso, and daughters, Isabella, 14, Gia, 12, and Stella, 9.

While back in Los Angeles, Matt has spent ample time bonding with his girls, hitting the beach repeatedly. Now, he’s back to work but looking happy hanging with Jodie! The Last Duel is expected to hit theaters in October 2021.