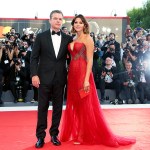 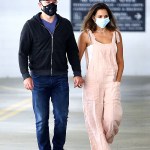 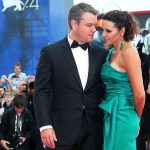 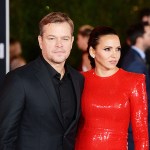 Matt Damon and his wife Luciana are back in L.A. after quarantining in Ireland. The couple lovingly held hands while entering a medical building, protecting themselves with face masks.

Matt Damon and his family have returned to Los Angeles and are already adapting to the lifestyle of still needing to wear face masks in public. The couple and their kids had been spending a blissful time overseas while under quarantine in Ireland, where Matt was prepping for a film. The 49-year-old film star and his wife Luciana Barroso, 44, were photographed holding hands on June 4 as they entered a medical building in Santa Monica, CA. The pair is celebrating their 15th wedding anniversary in December 2020 and looked just as in love as ever, sweetly showing off their PDA as they made their way through a parking structure.

Luciana looked ready for summer in adorable pale pink linen overalls with straps that tied on her shoulders. It had open sides that showed off her white tank top underneath. Matt went super casual in a blue t-shirt and zip-front hoodie, along with a pair of jeans. Both Matt and Luciana wore protective face masks, so only The Martian star’s recognizable eyes could be seen.

The Damons were able to escape being locked down inside their L.A. mansion during most of the California “Safer at Home” quarantine, which began on March 19. The couple, as well as three of their four daughters Isabella, 13, Gia, 11, and Stella, 9, were already in Ireland when the pandemic broke out, as Matt was scheduled to film Director Ridley Scott‘s period piece The Last Duel. They decided to stay on in the seaside town of Dalkey, south of Dublin, after production was halted because of the coronavirus outbreak. The couple had already hired teachers for their daughters and hunkered down amongst the beauty of the area.

“We’ve got this kind of incredible setup in this place. It’s absolutely gorgeous…There’s trees and forests and and woods and ocean. I can’t think of any place you’d rather wanna be in a two-kilometer radius of,” Matt told local radio station Spin 1038 about their stay. They were welcomed by locals, as other celebs have homes in the idyllic town. “It feels a little like a fairy tale here,” Matt continued. “When we came in they [Dalkey natives] were like, ‘Well, Bono lives over there, and Enya lives over there.’ It’s incredible. This is one of the most beautiful places we’ve ever been.”

“Obviously what’s going on in the world is horrible, but for my family — I’m with my whole family; I’ve got my kids, and we have teachers with us because we were planning on missing school for about eight weeks.  We’ve got what nobody else has, which is actual live human beings teaching our kids…so we feel guilty,” Matt added. Now the couple is back in the U.S. and taking the necessary personal protection precautions agains the spread of COVID-19. They’re probably missing those magical forests and woods right about now.