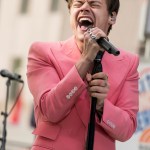 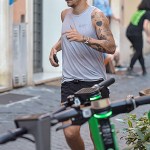 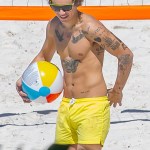 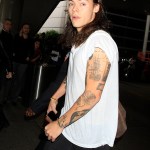 Harry Styles is reportedly ‘in negotiations’ to star in a movie alongside ‘Cinderella’ star Lily James. The movie is being adapted from a popular queer romance novel!

Harry Styles, 26, is reportedly in talks for another movie. This time, the One Direction alum is “in negotiations” to star in a film alongside Cinderella star Lily James, 31, our sister publication Deadline reported on Sept. 17! The movie is based on Bethan Roberts‘ book My Policeman, and a deal was just closed between Amazon and Berlanti Schechter Productions to produce a flick based on the 2012 novel, the outlet reported.

Production will begin next summer in 2021, Deadline also reported. HollywoodLife has reached out to Harry’s and Lily’s reps for comment, but didn’t hear back by the time of publication.

My Policeman is a queer-themed novel that opens in 1999, when a man named Patrick — who is ill — visits the home of an old married couple named Tom and Marion. This unveils the love triangle between these three characters in Brighton, England in the 1950’s, when homosexuality was still illegal. Although Tom and Marion married each other during this time, Tom and Patrick were actually in love with one another.

Harry’s fans were ecstatic at the prospect of not only seeing the “Watermelon Sugar High” singer on the big screen again, but alongside Lily as well. “WHAT THE HECK WAIT HARRY IS GOING TO BE IN ANOTHER MOVIE NOW WITH LILY JAMES- ACTOR HARRY IS REALLY COMING HARD,” one fan shout-tweeted, while another wrote, “not to alarm anyone but if the rumors are true we could be seeing lily james and harry styles in a movie together. pls imagine the power.” A third fan gushed, “Harry styles and Lily james being in a movie together is my entire sexuality.”

first florence and harry in a movie now lily james and harry???? i! can’t! take! this!

Like Harry, Lily carries an impressive reputation on her shoulders. She played Lady Rose MacClare in Downton Abbey between 2012-2015, and from there on out, has held leading roles in big box office movies like Cinderella, Pride and Prejudice and Zombies, Baby Driver and Mamma Mia! Here We Go Again.

it really is harry styles’ world and we’re just living in it pic.twitter.com/QXmQUuzNG4

Not even a full week ago, it was announced that Harry landed a movie with another big name: Midsommar’s Florence Pugh! The singer is replacing Shia LaBeouf in the psychological thriller Don’t Worry Darling, which Deadline also reported on Sept. 11. It has been a good month for Harry stans, who haven’t seen the 1D alum on the big screen since making his feature film debut in Dunkirk in 2017.