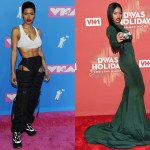 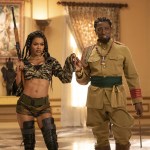 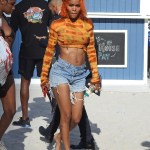 Teyana Taylor celebrated at her baby shower alongside pals like Lori Harvey and Lala Anthony, and she looked absolutely stunning in a red dress.

Teyana Taylor, 29, is seriously glowing! The soon-to-be mother-of-two, who’s expecting her second child with husband Iman Shumpert, celebrated the baby girl with a star-studded baby shower. She donned a red dress for the September 3 event, which was tight around her growing bump and had a long, flowy sleeve design. She posed for a snap with Steve Harvey‘s daughter Lori Harvey who stunned in a black and white striped midi dress while cradling her friend’s bump.

Other celebs in attendance included LaLa Anthony, who looked chic in a bright pink tank top and matching pants. She posted several snaps to her Instagram Story, including clips of the dance floor, and one young woman blew the rest of the event attendees out of the park with her moves: Teyana’s mini-me daughter Iman “Junie” Tayla Shumpert Jr. The youngster had better moves than most grown ups, and totally gave it her all while dancing around in a red dress and a diamond necklace.

Teyana and Iman first shared their baby news back in June when she revealed her baby bump in her music video for her song “Wake Up Love.”  Her NBA star hubby made an appearance in the clip, and was later seen in the background of an Instagram video, which showed him driving while is stunning wife did a belly dance for her phone camera in the passenger seat.

She recently took to Instagram to share a new snap of herself meditating outdoors. ”Getting some vitamin [D] w/ babygirl,” she captioned the carousel post, which featured three different pics of her looking seriously zen. She wore a cropped, long-sleeved beige top with a zipper, which exposed her growing bump. She also rocked loose-fitting blue, green, and black pants which featured a geometric pattern. We can’t wait to meet her new baby girl!