The Real Housewives of Potomac just started its fifth season and the explosive fight between Candiace Dillard, 33, and Monique Samuels, 36, is so dramatic that OG Karen Huger, 57, is feeling the effects. “I can say for me personally that it was very painful,” Karen told HollywoodLife EXCLUSIVELY during an episode of TVTalk on Aug. 9. “These two women are my friends and to see that happen, it was very painful for me to see this and you can imagine the position it put me in. If you’re truly a ride or die girlfriend which I am, I had to be objective and that was very challenging and you guys will have to stay tuned and I did my best. No one is perfect and I did my best in handling the situation and I stand by what I did.”

Fans have only been able to catch glimpses through clips of the explosive fight between Candiace and Monique. In the trailer for the entire upcoming season, we see broken glass and hear yelling between the women. The fight, which took place back in October 2019, got so nasty that both women accused the other of second degree assault. The charges were later dropped.

With a fight so physical, Karen undoubtably feels it could be one of the gnarliest viewers will see. “It’s based upon the viewer how they perceive it,” she added. ” I don’t think it’s the biggest fight in Housewives history. I think it’s right up there with it though,” she teased.

Known as the ‘Grande Dame’ of the show, the season one star had no problem stepping into her mother hen role. A friend to both ladies, she did her best trying to mediating the two. “You will see me play into that role but you will also see me go,” Karen said. “When the mother hen cannot teach the chickens. You’ve got to let your hands go and do the best you can do and I decided just to stand my ground and be true to myself and how to raise my children. I wanted them to be proud with how I handled the situation because it does reflect to the younger generation how to handle conflict, what do you do and what do you do as a friend who’s caught in the middle of that and I’m proud of what I did.” 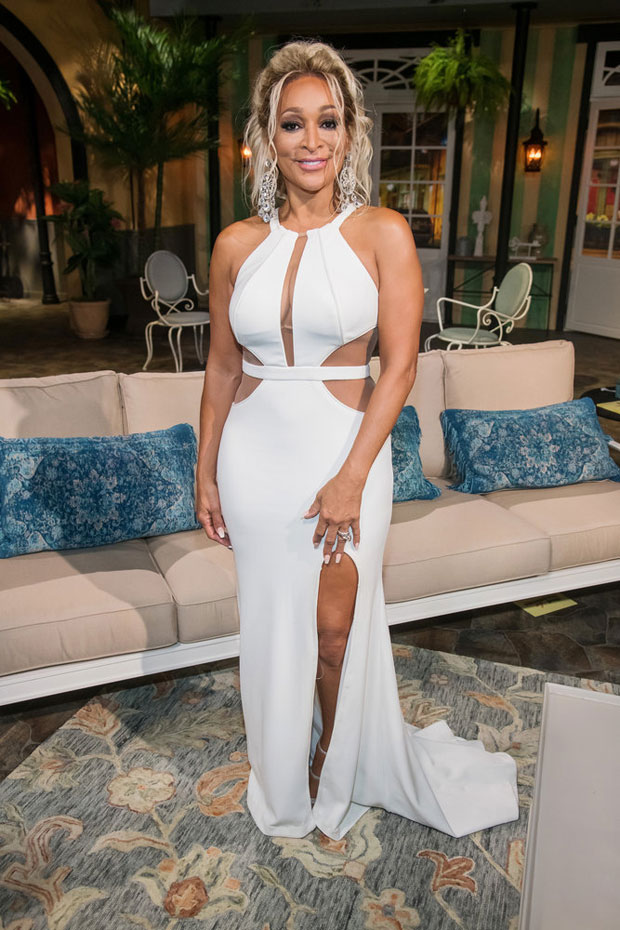 The entire cast is still feeling the effects from the evening at the winery, which has driven a huge wedge amongst them all. “I think it’s a very fair comment,” Karen revealed. “It had a devastating effect on the cast. You just have to stay tuned and see. There were people who were for one and not the other. It was a hot mess and painful to watch but at the same time, understandably. We had to take this step by step as a group to work through it and get to the other side of it. My thing was to try and love both women through this because I saw them as casualties, not the women taking sides on the show, so you’ll see that, too.”

The Real Housewives of Potomac airs Sunday nights at 9pm on Bravo.