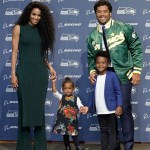 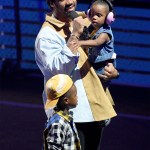 It’s official — Ciara and Russell Wilson have welcomed a baby boy! The singer gave birth to her third child on July 23, and we couldn’t be happier for this adorable family!

Congratulations are in order! Ciara, 34, and her husband Russell Wilson, 31, have welcomed a beautiful baby boy. The singer shared the exciting news on July 24, just one day after giving birth to her third child, and second tot with hubby Russell on July 23. Ciara took to social media to share a video of herself cradling the newborn, Win Wilson, and singing “Happy Birthday” to him from her hospital bed.

The couple confirmed that they were expecting their second child on Jan. 30, and fans couldn’t be happier to see the pair, who tied the knot in 2016, continue to expand their family. They made the announcement on Instagram with a photo of Ciara in a bikini, showing off her bare baby bump. “Number 3,” the pregnant singer captioned the photo, which was snapped by Russell.

The Seattle Seahawks quarterback announced the pregnancy with a closeup selfie, which showed a pregnant Ciara in the background. The “Goodies” singer shares her firstborn child, a son named Future Jr., 5, with the rapper Future. She was previously engaged to the rapper, but they ended their relationship in 2014, and it has been pretty volatile between them ever since. Ciara started dating Russell, who plays in the NFL, in 2015. They were engaged in March 2016, and tied the knot that summer in England. The pair’s first child, a daughter named Sienna, 2, was born in April 2017. We can only imagine how excited these two kiddos must be to have another little sibling!

Russell and Ciara are extremely dedicated parents, and are often showing off cute photos of the kids on social media. They’ve also taken the kids to some red carpet events, including the Kids’ Choice Awards. Even though Future is not Russell’s biological child, he’s taken him under his wing, and is often playing sports and doing other physical activities with the little guy. So sweet!

Unsurprisingly, Ciara has been absolutely slaying the pregnancy fashion game! She wowed on the red carpet time and time again, flaunting her baby bump with bold, beautiful dresses. From high slits and skintight sparkles to plunging necklines and fun ruffles, she was constantly cradling her budding belly in style. Big congrats to Ciara and Russell! Having expertly raised little Sienna already, we know these two are total pros!