Sharna Burgess knows the feeling of being axed from Dancing With the Stars all too well. So, when Tom Bergeron and Erin Andrews were revealed to be the latest stars cut from the show, Sharna took to social media to show them some love. She shared two photos of herself with season 27 partner (and winner), Bobby Bones, along with Tom and Erin, to go with her message. 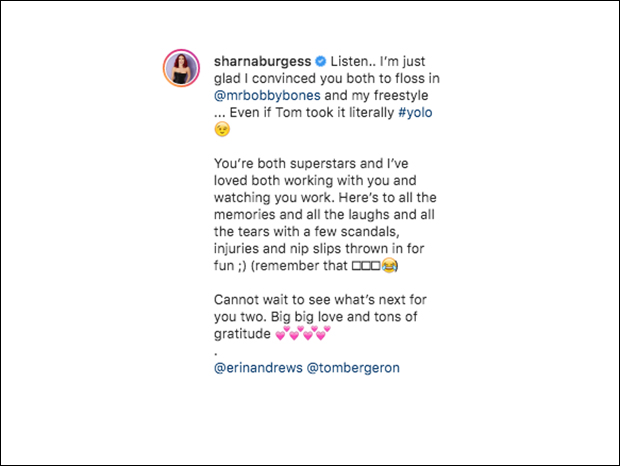 “You’re both superstars and I’ve loved both working with you and watching you work,” Sharna gushed about the show’s co-hosts. “Here’s to all the memories and all the laughs and all the tears with a few scandals, injuries and nip slips thrown in for fun. Cannot wait to see what’s next for you two. Big big love and tons of gratitude.”

Dancing With the Stars will return for its 29th season this fall, and ABC has not yet revealed plans for replacement hosts after Tom and Erin’s firings. Tom was a host on Dancing With the Stars since its inaugural season back in 2005. Meanwhile, Erin competed on the show (and came in third place!) during its 10th season in 2010. She replaced Brooke Burke as Tom’s co-host during season 18 in 2014, and had been in the position ever since.

Tom was first to share the news that he had been axed from the show on July 13. “Just informed [DWTS] will be continuing without me,” he tweeted. “It’s been an incredible 15 year run and the most unexpected gift of my career. I’m grateful for that and for the lifelong friendships made. That said, now what am I supposed to do with all these glitter masks?”

ABC then confirmed Tom’s tweet, along with news of Erin’s departure. “Tom Bergeron will forever be part of the Dancing With the Stars family,” the statement said. “As we embark on a new creative direction, he departs the show with our sincerest thanks and gratitude for his trademark wit and charm that helped make this show a success. Erin will also not be returning and we appreciate all that she has brought to the ballroom. Fans have been rooting for her since she originally competed as a contestant back in 2010 and her signature sense of humor has become a hallmark of the show.”

Meanwhile, Sharna began her Dancing With the Stars career during season 16 in 2013. She was on the show until season 27 in 2018, when she got her first win with Bobby. The win was quite controversial, as Bobby continuously received lower judges scores than his competitors towards the end of the season. Sharna, along with fellow pro, Artem Chigvintsev, were not invited back for season 28 in the fall of 2019.

Although Sharna was blindsided by being cut at first, she dished to HollywoodLife EXCLUSIVELY about why she was okay with the decision during a Sept. 2019 interview. “It was a case of they just couldn’t match me up with a partner this season and that’s okay,” Sharna admitted. “It happens. But it’s been made very clear that they hope they can have me in the family for things coming up in the future.”