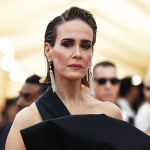 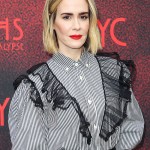 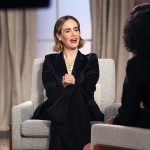 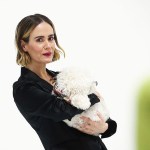 It appears Ryan Murphy’s biggest muse isn’t a fan of his other leading lady. Sarah Paulson refused to say anything positive about Lea Michele when asked about past co-stars calling out her alleged on-set antics.

There’s that old saying that if you don’t have anything nice to say, don’t say anything at all. Apparently Emmy winning actress Sarah Paulson is a big believer in that. The 45-year-old refused to talk about the headlines surrounding fellow Ryan Murphy favorite Lea Michele‘s alleged diva antics towards her Glee and Broadway co-stars. Both women are cherished stars for the creative wunderkind and producer, so when Sarah appeared on Watch What Happens Live with Andy Cohen, the subject of Lea’s accusations of awful behavior came up.

“Since you and Lea Michele are two of Ryan Murphy’s muses, what do you make of the recent news of her on-set behavior?” Andy asked Sarah on July 9. Though they were both in remote locations, they each stared into the camera with smiles on their faces. Andy looked like he was dying to see if the longtime American Horror Story star would spill, while Sarah gave a forced grin like she wanted to say something, but there’s no way she was going to.

After a couple seconds of awkward silence, Sarah told Andy, “I’m having a weird connection, I can’t really hear you,” hoping to avoid answering the question. Fellow guest, Real Housewives of New York star Sonja Morgan then broke the ice, asking “Isn’t there a thing called pleading the fifth on this show?” referring to one of Andy’s truth-telling games on the show where a guest can take a pass on answering one really damning question. Sarah agreed about wanting to “plead the fifth” and Andy moved on without Sarah giving an answer about Lea.

Ryan made Lea a star by casting the Broadway actress as Rachel Berry in Fox’s Glee, which ran from 2009-2015. Once that series wrapped, Ryan cast her in his next Fox show, Scream Queens. Meanwhile, the 54-year-old TV creator/producer upped Sarah’s Hollywood profile, casting her in his American Horror Story anthologies and her Emmy winning turn as prosecutor Marcia Clark in America Crime Story: The People Vs. O.J. Simpson.

While Sarah has become one of the most dimensional and in-demand actresses in Hollywood, Lea has been getting tons of bad press from former co-stars who claimed she was a nightmare to work with. It started on June 1 when season six Glee actress Samantha Ware, 28, called out Lea, 33, for making her life “living hell” on set. Samantha — who is Black — shared a tweet that Lea wrote about Black Lives Matter where she wrote, “George Floyd did not deserve this. This was not an isolated incident and it must end” with the hashtag “#BlackLivesMatter.”

Samantha then tweeted in all caps, “Remember when you made my first television gig a living hell?!?! Cause I’ll never forget. I believe you told everyone that if you had the opportunity you would ‘sh*t in my wig!’ amongst other traumatic microaggressions that made me question a career in Hollywood.” It opened up floodgates, as several lesser known Glee actors claimed they were mean-girled by Lea on set.

On June 3, Lea’s OG Glee co-star Heather Morris wrote on Instagram, “Was she unpleasant to work with? Very much so; for Lea to treat others with the disrespect that she did for as long as she did, I believe she SHOULD be called out.” She then pointed out, “It’s also on us because to allow it to go on for so long without speaking out is something else we’re learning with the rest of society.”

That same day, Lea issued an apology, but it didn’t get a warm reception as she used the word “perceived” several times. “What matters is that I clearly acted in ways which hurt other people,” she wrote on Instagram. “Whether it was my privileged position and perspective that caused me to be perceived as insensitive or inappropriate at times, or whether it was just my immaturity and me being unnecessarily difficult, I apologize for my behavior and for any pain which I have caused.”

Even after her apology, her former Glee co-star and ex-boyfriend Matthew Morrison wouldn’t stand up for her. When asked about all of the press about Lea’s bad behavior on FUBAR Radio’s Access All Areas on June 24, he deferred by saying, “You want to be a good, pleasant person to be around. That’s about all I’m going to say on that.”

But her former Broadway Fiddler on the Roof co-star Craig Ramsay wasn’t so diplomatic when asked about Lea on David Yontef‘s Behind The Velvet Rope podcast. He explained, “I think she’s a despicable, horrible human being. I think she has lost touch with reality.” He then added, “As far as Lea Michele is concerned, I think she is one of the most entitled people I have ever come across in this business!” Ouch. Talk about a bad review.