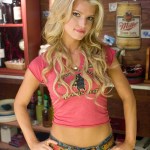 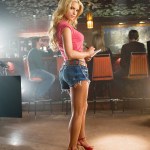 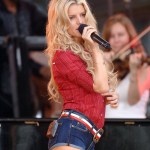 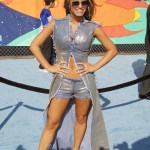 Jessica Simpson celebrated the last hours of her 30’s by rocking a pair of jeans that she first wore over a decade ago!

Jessica Simpson felt it was necessary to remind her millions of fans that she’s still got it right before her 40th birthday happened on Friday, July 10. The “Irresistible” singer wowed them when she struck a fierce bedroom pose in an outfit that included an item she’s had for a very long time! “I have kept these throwback True Religion jeans in my closet for 14 yrs (I’m not exaggerating!),” she captioned next to the makeup-free snap. “Figured that since I’m in the final hours of my 30’s I’d give them another try, and hello 40, so nice to meet you.”

The mother-of-three paired the retro pair of pants with a black and purple sweatshirt as she left her blonde hair cascading down both sides of her shoulders. “My daughter just asked me if I still had mine because they are back in style,” former Real Housewives of Orange County star Tamra Judge, 52, wrote in the comments section about the ripped jeans.

Jessica isn’t the only cancer in her family as her baby boy Ace (who she shares with husband Eric Johnson) just turned 7 on Tuesday, June 30. “HAPPY BIRTHDAY ACE!!!,” she wrote as part of a sweet Instagram dedication to him. “I cannot believe my boy is 7! This kiddo is amazing at everything! He is beautiful, kind, compassionate, obedient to his own heart, soulful, competitive, a gentle force of nature, observant, even tempered, complimentary, hugs when he sees conflict in the room, nurturing, athletic, intelligent, hopeful, daddy’s best friend, mommy’s snuggle monster, home run king, knows everyone’s next move, passionate, hilarious, a collector of baseball cards and crystals, one of a kind and good…he is just SO good.”

What a year it has been for the global superstar! She was the name on everybody’s lips after her memoir, Open Book, was released in February. Jessica didn’t hold back when it came to many aspects of her life thus far including her highly publicized split from ex-husband Nick Lachey, 46.

“But our anxieties about our careers just seemed to feed off each other,” she wrote in the book. “We had been together almost seven years when I told Nick, ‘I think I want a divorce.’ I later heard that he told the press he was blindsided. I don’t know how. At that point we were not even speaking to each other. Maybe he was just shocked that I stood up for myself. I don’t think he ever thought I would take the leap.”