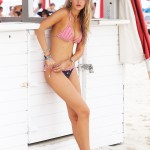 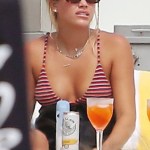 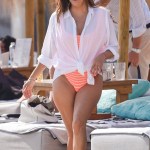 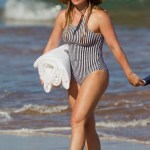 There are all different kinds of swimsuits out there, but stripes are a staple design on any style — and these celebs have rocked the look to perfection.

There’s nothing like a good striped swimsuit to keep things simple, but sexy, in the summertime! Vertical stripes are always flattering, and the same can be said when they’re on a swimsuit. Stars like Gigi Hadid, Farrah Abraham, Kendall Jenner, Alessandra Ambrosio and more have rocked the striped bathing suit trend over the years, and we rounded up the best pics of celebs wearing the design.

Gigi was photographed hanging out on a yacht with friends in one of her best striped bikini looks. She wore a two-piece, high waisted swimsuit that featured blue and white stripes. The top featured thing straps, while the bottoms came up to above her belly button. The supermodel enjoyed the boat day with her friends while wearing the sexy look.

Meanwhile, Farrah wore her sexy, tiger-striped bikini while walking down the beach. The bottoms were super tiny, and featured the same orange and black, striped design as the triangle top. Farrah’s abs and long legs were on display in the itty-bitty number, and her hair was blowing in the wind as her photos were taken.

We’ve also seen Kendall rock the striped swimsuit trend. During a beach day in Malibu back in 2013, she wore an American Flag bikini, which featured red and white stripes on one side. She went boogie-boarding in the ocean while wearing the ensemble, and was photographed exiting the ocean while rocking the look.

Meanwhile, Real Housewives stars, Bethenny Frankel and Kelly Bensimon, have also both been spotted out and about in striped bikinis. Bethenny wore hers to OCRF’s ‘Paddle For Pink’ in the Hamptons, while Kelly modeled her striped bikini while taking a stroll down the beach. There are plenty of other amazing striped swimsuit looks from celebrities where these came from, too. Scroll through the gallery above to check out all of the best looks!