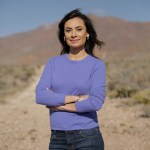 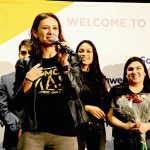 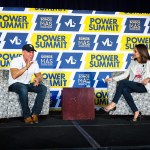 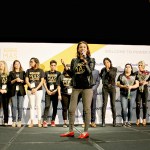 If Maria Teresa Kumar can mobilize the biggest group of young Latinos ever to cast ballots on November 3, they could flip the election. She’s determined to do that.

When Maria Teresa Kumar was nine years-old, she became a citizen of the United States along with her mom. The pair had immigrated from Bogota, Columbia, after her mother fell in love with and married an English teacher working there. The new family then moved to Sonoma, California.

“I just remember feeling so grateful,” she recalls today about going to San Francisco City Hall for her citizenship ceremony. That’s why it hit so hard when Donald Trump’s Justice Department announced earlier this year that it had created an official section in its immigration office to “strip citizenship rights from naturalized immigrants”, according to the New York Times.

For ‘naturalized citizen’ Maria Teresa Kumar, 43, the President and CEO of Voto Latino, one of the country’s largest voting registration organizations, this Trump administration move was even more motivation to register as many young Latinos to vote for the 2020 election as possible.

Kumar’s mission is to have “maximum participation” in our government, by first getting Latinos registered to vote, and then second, reminding and enabling them to actually cast their votes. The events of the past four and a half years of Donald Trump’s candidacy and presidency including demonizing Latino immigrants as ‘rapists’, separating children from their parents at the border, trying to remove the protections for DACA young people and setting up that denaturalization committee, have pushed Kumar, her 22 Voto Latino staffers and their 7,000 volunteers into overdrive.

“Quite frankly, the assault on the Latino community has been so stark”, she observes. “For us, it’s really explaining to the Latino community that under this president, no one is in a position to be their best versions of themselves, because there’s so much prejudice because of who he considers to be really American.” Kumar was thrilled on June 18, speaking out on MSNBC, where she is a regular guest commentator, after the Supreme Court ruled that the DACA program can be continued for now.

Maria Teresa and Voto Latino’s  initial goal for 2020 was to register 500,000 new voters in time for the November 3 election, and to mobilize 1.5 million Latinos to vote. But now with the energy in the streets fueled by the Black Lives Matter movement, which many Latinos have participated in, she believes she can register 750,000 new voters and mobilize 2 million to cast their ballots, if she can just raise another $3 million. She is visibly excited by the surge in registrations  – 63,000 – in just the first few days of June.

Not only that- 71% of the new registrants are female and 80% are under the age of 33. That means that Kumar and her team are fulfilling their goals- to reach young Latinas “because we recognize that they are the ones that help shepherd the rest of their family when it comes to making decisions about what to buy, where they should go to the doctor, and in this case, to [participate in] democracy”, she says.

Kumar played that role herself as a young person, often translating and explaining various things to other family members who did not yet speak English. She and her Voto Latino team members believe that if they can register young Latinas to vote, they’ll help their other family members and friends to register as well, and then to vote. She sees an unprecedented opportunity to unleash the power of Hispanic-heritage voters and particularly those under the age of 33 in 2020, because there are 15 million unregistered Latinos, 10 million are under the age of 33 and four million will be eligible to vote for the first time.

Having this opportunity is exactly what Kumar wanted when she was 28 and first met actress and activist Rosario Dawson, who had launched Voto Latino in 2004 when she was working with MTV to encourage young people to vote. Kumar had graduated from the John F Kennedy School of Government at Harvard University and had been determined to “provide access and information to the Latin community.” When she talked with Rosario Dawson about the actress’s goal to register Latino voters, Maria Teresa says “I felt like it was my calling.”

She agreed to lead Voto Latino for no salary and no organization, just with a mission, and financed the first three years of the fledging organization with her credit card, she says. Now, she’s grown Voto Latino to become the expert organization on finding young Latinos who hadn’t yet been registered to vote, through targeted social media. Traditionally, voter registration groups and political parties have found this group very hard to find. Kumar enthusiastically explains that Voto Latino now knows what their “voter profile” looks like, so they’ve been able to use modeling techniques to find even more potential Latino voters. And while the pandemic has made it nearly impossible to register young voters in the traditional places like concerts and sports events, Voto Latino is going gangbusters, soley working digitally.

Today, Rosario remains a deeply involved board member and spokesperson for the foundation but as well, Kumar has enlisted a host of influential Latinos who are using their star power to urge Latinas to get registered to vote. They include America Ferrera, Gina Rodriguez and Wilmer Valderrama.

What’s new for the organization in 2020, is that Voto Latino, previously a non- partisan group, has endorsed Joe Biden for president. “We endorsed Joe Biden, and we endorsed him early. And the reason we did it is because it’s our way of sounding the alarm that things are not normal,” she explains. “COVID has been especially hard on the Latino community and it exposed what leadership does in a time of crisis. And we can’t afford more failed leadership. What we need is a bold leader who brings us together as Americans, and reminds us of what happens when you come together and put our mindset to something.”

The CEO stresses to all idealistic Latino voters that they shouldn’t get hung up on falling in love with a presidential candidate in 2020, but instead be highly pragmatic. “It’s more, which is the candidate that we can sit at the table with post November and make sure that we are part of the solutions that are needed after COVID.” She wants young voters to understand she is furious that Latinos are being treated as “less than” by the current federal government – they aren’t being taken care of “equally,” she believes.

What she wants Latina and Latino young voters to know is that former Vice President Joe Biden was asked by Voto Latino to provide his policy positions to the organization for their evaluation. Not only did he respond quickly, but he sent Kumar and her team a 22-page, in-depth document outlining exactly what he would do once he took office.

What she’s particularly excited about is his pledge to provide four years of free college for four years at a state school, if students’ families have an income of less than $125,000. As well, he has a plan for forgiveness on student loans.

Both these policies are “game changers” for Kumar, who herself is a mom of two young children. Her husband is also a digital entrepreneur. “The two policies will enable millions of young people of every background to go to college and not be strapped with debt. It allows you to not have bad credit scores and to potentially buy a home one day,” she points out.

Kumar enthuses that Voto Latino has discovered that 79% of the people they register to vote actually DO vote elections. They saw this huge success rate in the 2018 mid terms. And, she also knows that 49% of registered Latino voters are never contacted by traditional political parties or candidates. That’s why she’s obsessed with raising that extra $3 million so she can register those additional 250,000 voters in all the critical swing states this year- Pennsylvania, Wisconsin, New Mexico, Florida, North Carolina, Arizona, Nevada, Georgia and Kansas.

Her team has achieved this success rate by doing followup texting, and by giving their registrants all the information they need to vote- like the locations of their local polling stations and information on how to apply for mail-in ballots. They even have an app called “VoterPal” that allows users to register friends and family. She has enlisted VP Joe Biden and Hillary Clinton to speak out to her base of donors, to try to get those needed funds, and you can feel her urgency as she speaks.

“We’re small but we’re mighty, and we definitely punch above our weight”, she enthuses. Her worst nightmare is that 100 million eligible voters will sit out the presidential election in 2020, and yet we are at “one of the most trying times in our nation’s history… we have an epidemic… we are teetering perhaps on a great depression. We have the civil rights movement of the 1960’s rearing it’s head, AND we have a leader who instead of unifying us, plays with people’s emotions with race and with our economy and our health in order to do photo opps. He’s after quick political expediency instead of getting the work done that needs to happen.”

She believes too many Americans, including young people, have “taken our democracy for granted” and “we are playing with fire.” That means that no one can sit out the 2020 election by not voting. And so she and her team are keeping up their work with intense dedication.

On November 3rd, she vows : “We need to flood the voting booths!”

To register to vote right now, you can go to Hollywoodlife’s Rock the Vote module below and register, and if you want to become one of Voto Latino’s volunteers go to the Voto Latino website and click on the “Get Involved” tab, where you can sign up to help and get text news from Voto Latino.

You can also donate to Voto Latino and help them register more young Latino voters here as well.