Brad Pitt may have thought he was unrecognizable while riding his grey and black BMW motorcycle on Sunset Boulevard on Wednesday afternoon. But, one fan was able to identify the actor, who was wearing a grey helmet, aviator sunglasses, a blue mask and protective gloves amid the COVID-19 pandemic. Paparazzi caught Brad, 56, leaning in for a selfie with the smiling fan as his vehicle was stopped in the street. 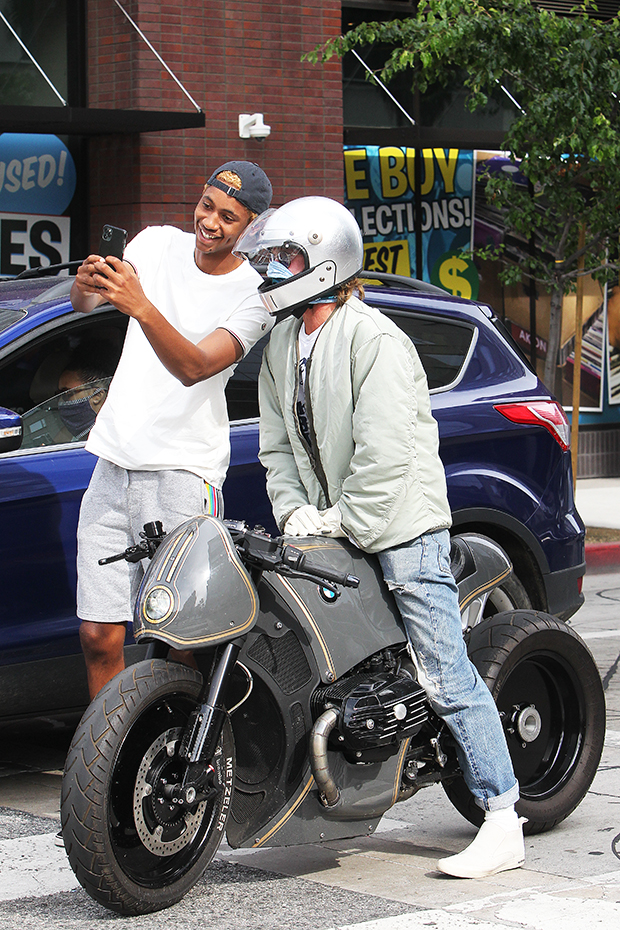 (Photo credit: SplashNews)
The Once Upon a Time in Hollywood actor was riding his motorcycle solo when he was spotted out and about in LA. It’s unclear where he was headed while dressed in a pale grey bomber jacket with a printed white tee underneath. He wore ripped jeans that were fold at the bottoms to show off his clean white sneakers.
The actor’s outing came after he was photographed in Malibu on May 26, checking out another two-wheeler, Rocker Flea’s BMW R1250 motorcycle. Brad, who wore distressed denim at the time (clearly a go-to style staple for him), showed off his long dirty blonde locks. He was captured with his hands on his hips during a conversation with the musician.

Although he’s been hunkered down in California amid the global health crisis, that didn’t stop Brad from appearing in the April 25 virtual episode of Saturday Night Live. He committed to SNL after he got word that Dr. Anthony Fauci, who’s been a public resource for coronavirus in the news, wanted the actor to portray him. And, of course, the Oscar-winner delivered a stellar portrayal of the doctor. Fauci later praised Brad’s performance.

And now, a message from Dr. Anthony Fauci. #SNLAtHome pic.twitter.com/LYemNAWaAT

“I think he did great,” the 79-year-old physician and immunologist said during an appearance on Telemundo’s “Un Nuevo Dia”. “I mean, I’m a great fan of Brad Pitt, and that’s the reason why when people ask me who’d I like to play me I mention Brad Pitt because he’s one of my favorite actors. I think he did a great job.”