On last week’s episode of T.I. & Tiny: Friends & Family Hustle, T.I. made a bet with his son, King Harris. Tip agreed to give King the investments he needed to fund his music career — if King could sell out a 300-person venue on a weeknight. Tiny didn’t think the bet was fair, and took it into her own hands to help King come out on top. On the June 1 episode, she continued to help King secretly win the bet.

“When I found out about this wager, I felt like things were stacked in Tip’s favor,” Tiny explained. “Even though I agreed to this bet, I can’t let King lose. What Tip doesn’t know won’t hurt him.” After finding out that King had a good following of fans in Chattanooga, Tennessee, Tiny took the 15-year-old on a secret road trip there without letting T.I. know. “The promoters in Chattanooga invited us down to feel this out, see if he has enough fans there, and see if this is a great place for us to do a show,” Tiny revealed. 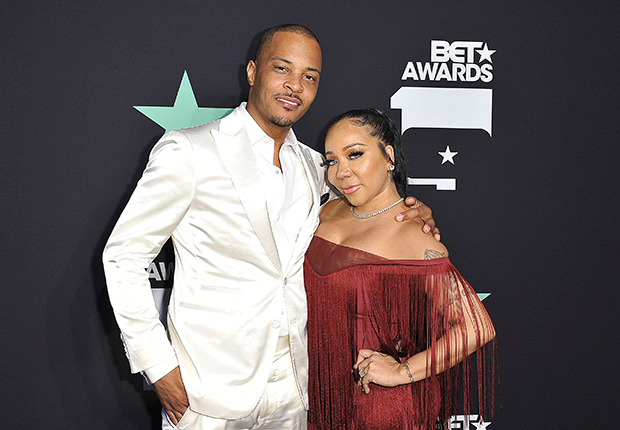 King added, “If I lose this bet, it could mess up my music career,” King admitted. “I’m very grateful to my mom because I know she’s going to do everything to help me. But my dad — I don’t want him to find out that I asked the Queen of Atlanta to help me!”

He then took part in a radio interview, as well as a meet and greet, where fans flooded in to meet him in person. Overall, it was definitely a successful day, and proved that Chattanooga would be a good place for the concert bet to take place. “The crowd size is way bigger than I expected!” Tiny raved. “Chattanooga showed up for my baby King.”

Unbeknownst to Tiny and King, though, T.I. was keeping an eye on things from back home. “I know good and damn well that Tameka and King went up to Chattanooga without telling me,” he said. “You want to keep a secret? Stay off Instagram! Don’t take pictures! Its alright, it will be straightened out.” T.I. planned to talk to his wife about the situation after a charity kickball game, but when her team lost, he decided to continue to wait it out.

“I think I’ll bring it up another time,” he concluded. “I’ll give you a secret — when women get upset, leave them alone!” It looks like we’ll have to see how this one continues to play out on T.I. & Tiny: Friends & Family Hustle, which airs on Mondays at 9:00 p.m. on VH1.