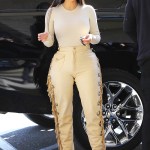 Kim Kardashian’s quarantine style is on point! The reality star showed off her fresh blonde locks for the sexy at-home photoshoot.

Kim Kardashian, 39, is “all dressed up with nowhere to go.” The KKW Beauty founder looked absolutely stunning as she posed outside of her Los Angeles area home for an impromptu photoshoot! Kim rocked a sexy white bikini along with a belted white leather pair of chaps, showing off her world famous curves and derrière. She gave the camera a fierce look in the first snap, holding onto the open door of her silver metallic Mercedes Benz. In the next, she squatted low to the ground as she kept her hand on the door handle while the photographer — perhaps husband Kanye West — snapped away!

Kim opted to rock a loose beach texture to her hair, complimenting the revealing white swimsuit perfectly. Adding a ’90s inspired pair of black sunglasses, the mom-of-four completed her cowgirl look with designer-of-the-moment Amina Muaddi‘s begum sling in a clear PVC style. Little sister Kendall Jenner is also a fan of the shoe brand, rocking the exact $895 pair while out for dinner in Miami last December. Kim’s outfit was giving us serious Christina Aguilera vibes, as the singer iconically wore several pairs of revealing chaps in her 2003 video for “Dirrty.”

The fresh new photos of the SKIMS creator come hot off the heels that the KarJenner clan are continuing to shoot episodes of Keeping Up With The Kardashians in quarantine. The shows’ producer Farnaz Farjam confirmed the news, dishing that Kim and Khloe Kardashian have been filming plenty. “I’m really excited for people to see Kim having to juggle everything on her own, especially early on, when it was so, so scary,” Farnaz said to Elle magazine. “Now people have been quarantining for a long time and have trusted people in their lives to help them out, but in the beginning they didn’t have that. Watching Kim juggle four kids will be really relatable. No matter how big her house is, four kids is four kids,” she also added.

All dressed up with nowhere to go

Like sister Kylie Jenner, Kim has also been doing her part to support COVID-19 related efforts! The law student launched a new line of nude colored face masks through her line SKIMS, and announced she would be donating 10,000 of them to charities like the LA Food Bank, Baby2Baby, Good+ Foundation, and the National Domestic Workers Alliance. The hot $8 item — which is also washable — is currently sold out, however, a waitlist is available on the SKIMS website.