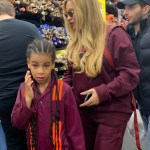 Blue Ivy Carter jammed out to Beyoncé’s ‘The Lion King’ song, ‘Mood 4 Eva,’ and the cute clip really was a mood. The 8-year-old proved that she’ll have no problem picking up complicated choreography, just like her mom!

Blue Ivy Carter could totally headline Coachella 2030! The eight-year-old’s dance moves gave us flashbacks to her mom Beyoncé’s legendary choreography at Coachella 2018 in an adorable clip (see below), posted by her personal stylist Manuel Mendez on May 12. Blue, who was rocking a pale pink jumpsuit, channeled Queen Bey’s confidence as she moved her arms to the beat of her mom’s lyrics in “Mood 4 Eva”: “Nala, sister of Naruba / Oshun, Queen Sheba, I am the mother.”

Just like the name of Beyoncé’s song, the adorable video was a mood! “Mood 4 Eva. #love,” Manuel captioned the clip. It was actually taken from a scene in Beyoncé’s 2019 documentary, Making The Gift. The song “Mood 4 Eva” is also found on the soundtrack for The Lion King: The Gift!

While Blue didn’t lend her vocals for that track, she was featured on another song in the movie’s soundtrack: “Brown Skin Girl.” The song led Blue to make her debut on Billboard’s Hot 100 chart in July of 2019, and to win the Ashford & Simpson Songwriter’s Award at the 2019 BET Soul Train Awards! Dancer, singer, songwriter: Blue is already an accomplished multi-hyphenate like her mom.

While Blue was front and center in this video, fans speculated if the gifted child was behind the screen in a video posted by her grandma, Tina Knowles-Lawson, on Mother’s Day. While Tina and family friend Kelly Rowland wished a happy Mother’s Day to fans, a child’s voice suddenly declared, “And don’t forget all the beautiful daughters out there, which I am one of them.” The moment (which caught Tina and Kelly off-guard) was too cute for words, and fans insisted that the mystery voice belonged to Blue.