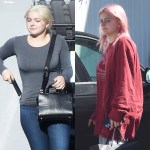 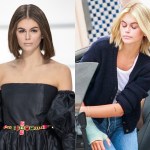 NeNe Leakes is ‘trying bangs!’ The ‘Real Housewives Of Atlanta’ star showed off her bold, blonde fringe in a new photo she posted to her Instagram grid. See the before and after pics of NeNe’s ‘do!

Another day, a new ‘do! NeNe Leakes took her gorgeous blonde locks to the next level with her recent hair makeover, but even she is still trying to figure out how she feels about it. On May 6, The Real Housewives Of Atlanta star, 52, took to her Instagram grid and shared the new look with her over three million followers. NeNe was positively glowing in the image, wearing an orange T-shirt, makeup that highlighted her natural beauty and, of course, the pièce de résistance, her blonde hair with bold fringe that fell just below her eyebrows!

“I be trying bangs but i just don’t know how i really feel bout them,” NeNe began the caption to her post, adding a thinking emoji. “I think you have to have on a certain kind of outfit maybe.” The reality TV star also gave full credit to Color Mane Wigs for the fresh look. Even though NeNe was still on the fence about her hairdo, fans of the star thought her fringe was absolutely fabulous! “You look beautiful as always,” one fan commented on the post, while another chimed in to say that NeNe looked “so gorgeous.” Clearly, the cut was a hit with her fans!

But NeNe has never been one to shy away from trying new hair styles before. The RHOA star has taken her blonde locks from a pixie cut, to a bob, and grown her hair out until it’s long and flowing! In the past, however, fans haven’t exactly been as fond of NeNe’s look — and one time it wasn’t even about her hair. In an April 1 Instagram post, NeNe was accused by a follower of looking “like a total different person.” Fans of the star were quick to defend her and, for her part, NeNe was simply unbothered by the whole confrontation in her comments section.

I be trying bangs but i just don’t know how i really feel bout them 🤔 I think you have to have on a certain kind of outfit maybe😏 @colormanewigs www.colormanewigs.com

With her new locks, NeNe seriously has a fresh look going on amidst quarantine, joining a growing club of celebs who are playing with their looks! Stars like Keke Palmer, Kristen Stewart, and Hilary Duff are all trying out new, creative hairdos during their time in quarantine. Even Buffy alum Sarah Michelle Gellar went as far as to dye her hair pink! While NeNe didn’t take her look that far, it’s still so fun to see her trying something new! We cannot wait to see which stars try out new cuts and colors in the future!