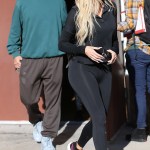 Scott Disick struggles to talk about his parents when his uncle comes to visit during the April 30 episodes of ‘KUWTK.’ Scott admits it’s ‘not easy’ to talk about them and he misses them all the time.

As Scott Disick goes through some old photos from childhood, Kim Kardashian asks Scott about his childhood. He brings up his Uncle Dave. Scott hasn’t seen Dave very much since his parents, Jeffrey and Bonnie, died suddenly within 3 months of each other in 2013 and 2014. Scott has Dave come out to visit. Dave reminisces about the past to Scott, Kim, and Khloe Kardashian. “Scott was really good at everything,” Dave says. As Dave talks more about Scott’s parents, Scott remains silent.

Kim asks Penelope Disick whether or not she remembers her grandparents. “Bonnie loved you, P,” Kim says. When it gets to be a little too much for him, Scott gets up and walks away. “I wish Scott didn’t get like this,” Khloe admits. “I wish he would either talk about how he’s feeling, or I think the more he does talk about his parents, the easier it will get. And it’s fun to talk about memories. You don’t want your parents to just disappear.”

Dave knows him being here must be hard for Scott. Dave is a reminder of Scott’s parents. Khloe tells Dave that it was “really hard to watch” Scott grieve the loss of his parents.

Later, Scott comes around and shows Reign Disick photos from his childhood. “I think when my parents passed, it was just too hard to talk about and, you know, as much as I kind of was dreading looking through some of these old photos because I thought it was going to bring up sad memories, I’m happy Dave brought them with him,” Scott says. “Because the truth is, it’s brought up so many amazing memories and so many things I’ve forgot.”

He continues: “It’s definitely not easy, the fact that I don’t have my parents here. And I miss them a lot, but I think the more I talk about my parents, the more my kids will feel connected to them and remember them.”