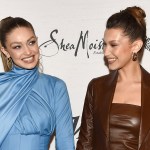 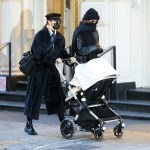 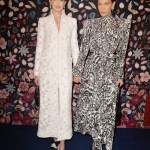 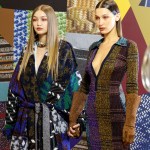 One day after Gigi Hadid’s pregnancy was reported, she showed off her stomach in a photo with sister Bella for ‘Vogue,’ taken while in isolation on the family’s Pennsylvania farm.

UPDATE (4/30/20 @ 7:15pm ET) Gigi has confirmed she is indeed pregnant! She appeared on a pre-taped segment for the  Apr. 30 The Tonight Show With Jimmy Fallon from home. “Obviously, we wished we could have announced it on our own terms, but we’re very excited and happy and grateful for everyone’s well wishes and support,” Gigi revealed, as TMZ played spoiler and broke the baby news on Apr. 28.

She continued, “Especially during this time. It’s a nice silver lining to be able to be home and be together and really experience it day by day.” Jimmy told Gigi to pass along his congratulations to daddy to be Zayn Malik, and said “Tell him [that] if you guys need anything, call Uncle Jimmy. I’ll make sure you guys are taken care of.” Gigi loved it, telling the host, “We will. We’ll have best Uncle Jimmy.”

Just because Gigi Hadid is reportedly four months pregnant with boyfriend Zayn Malik‘s baby doesn’t mean she’s going to stop being one of the world’s top models. The 25-year-old posed alongside fellow supermodel sister Bella, 23, in a fashionable photo shoot for Vogue from their family’s farm in Pennsylvania, taken in March. In what the magazine called “#VoguePostcardsfromHome,” top models are showing off how they’re dealing with quarantine life via pics of themselves in isolation. Gigi even revealed her stomach in the stylish photo. It was taken a month before her baby on board news broke, as the well-edited Vogue series and photo of Gigi dropped on Apr. 29, just one day after word got out that she was expecting.

Gigi can be seen standing  in front of a furry, large-horned steer on the farm, while holding a bucket. But that’s the only rural thing about her. She’s wearing a maroon and black varsity jacket with the word “Vogue” across the front. It’s pulled open to show Gigi’s still fairly flat tummy. She’s wearing high-waisted light blue denim jeans with a black belt, a tucked-in white t-shirt and an unbuttoned white blouse over that. Gigi donned knee-high green and brown flat leather boots, and she rocked full makeup with a large, fuzzy white and black pattered hat.

Bella posed to next to her sister while leaning against an ATV. She wore a fashionable black, yellow and orange puffer jacket, with tan pants tucked into her knee-high boots. But with Gigi’s pregnancy confirmed by her mom Yolanda, who told the Dutch TV program RTL Boulevard that her daughter is due in September 2020, all eyes are bound to be on Gigi’s belly in the photos. With her 5’10” frame, she should be able to hide a baby bump longer than other women with her tall height. Had her pregnancy news not dropped, most fans wouldn’t look at the photo and think she was expecting.

The COVID-19 pandemic has claimed lives, disrupted economies, and changed daily existence as we know it. It has also shown us how strong we can be, and how creative, even in isolation. At the link in our bio, @gigihadid, @bellahadid, and more models share what their lives have looked like the past weeks for #VoguePostcardsfromHome.

In Vogue‘s article that accompanies the photos of models in isolation, Gigi told the publication, “We are sending love and strength to everyone, especially those who are suffering and the people on the front lines; the doctors risking their lives every day, and the paramedics and cops and people who work in grocery stores. It’s lucky that a lot of us can work from home. But there are a lot of people who can’t.”

Bella added, “I’m not great at being alone, and I’m such a workaholic, so being isolated has been hard for me. Recently, I made a conscious effort to wake up in the morning and say my mantras to get myself into a happier state of mind. I’ve also started tie-dying my Chrome Hearts T-shirts, which we eventually plan on selling to donate the profits to single mothers across America who are struggling right now. It’s a blessing that we get to wake up here on our farm, and I want to give back.”