Joe Jonas and Sophie Turner were spotted walking their dogs in Los Angeles on Tuesday afternoon. The couple stepped out wearing matching black protective masks amid the COVID-19 pandemic. Both Sophie, 24, and Joe, 30, held onto separate leashes as they strolled through the sunny neighborhood.

The Game of Thrones actress, who’s been the subject of pregnancy reports since early February, went makeup free in a pair of glasses for the casual outing. She rocked a baggy zip-up bomber jacket, which hid her mid-section. Therefore, the photos didn’t debut a bump sighting.

Meanwhile, the “Sucker For You” singer sported dark grey jeans and matching sneakers. He wore a vintage Chicago Bulls tee (ironic since Michael Jordan‘s ESPN documentary, The Last Dance debuted this past weekend). Joe coordinated with his wife in a black bomber jacket. 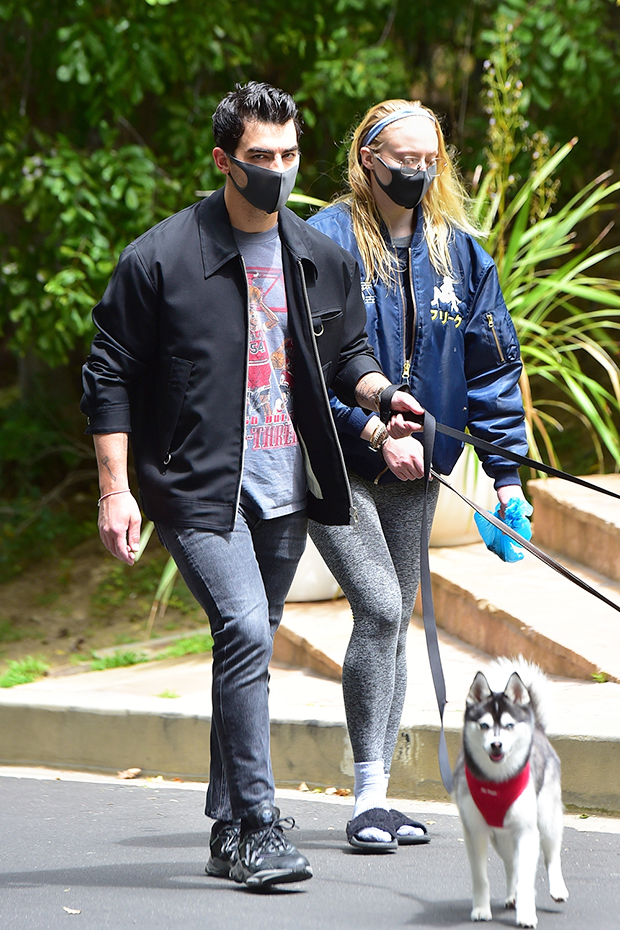 The outing came nearly two weeks after Joe let Sophie give him a “makeover,” A.K.A. a full face of glam during quarantine.

“He finally let me do his makeup,” Sophie captioned a closeup photo on Instagram, which showed the Grammy nominee with magenta eyeshadow all over his lids. “That highlight,” she added under a second photo that featured Joe’s glistening cheek bones.

Joe and Sophie are quarantining together in LA. They’ve been keeping busy by [Joe] playing video games, cooking pasta and hanging with their pups, as seen on their social media pages. The couple, who tied the knot in France in June 2019, recently donated 100 meals from a local Greek restaurant to staff at East Los Angeles Doctors Hospital. The hospital acknowledged Sophie and Joe’s donation in a post on Instagram on Monday, April 20.