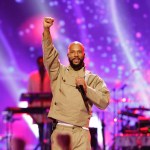 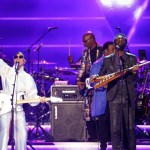 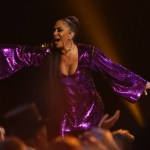 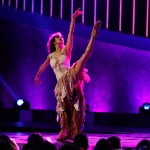 One of Prince’s famous exes, Sheila E., played a big part in a special tribute concert to the late singer, which aired on the four year anniversary of his death.

Sheila E., 62, was one of many artists who took the stage to remember Prince during Let’s Go Crazy: The Grammy Salute To Prince on April 21. The concert, which was filmed in January, aired on the four-year anniversary of Prince’s death. Sheila had a very special relationship with Prince, and took part in various performances throughout the special. Her first appearance of the night was alongside H.E.R. and Gary Clark Jr. Sheila played the drums and lent background vocals to the performance.

Sheila looked incredible while hitting the stage for the concert. She wore a sparkly purple outfit, which featured a matching top and pants. Of course, the bright purple color was a nod to Prince in itself! She completed the look with her hair pulled back into a slick ponytail, along with hoop earrings and dark eye makeup. Sheila held nothing back as she honored Prince’s memory, and she came back to the stage several more times throughout the night, as well.

It was way back in 1978 that Sheila met Prince for the first time. He was in attendance at a concert where she was performing with her father, and she got to meet him after the show. She eventually joined his band, sang some background vocals for him, and even opened for him on tour.

In 1987, Prince proposed to Sheila while they were performing onstage. In her memoir, she revealed that Prince was singing “Purple Rain” when he turned to her and mouthed the words, “Marry me?” Unfortunately, the pair’s hectic schedules got in the way of the relationship, and they never tied the knot. However, they maintained a close bond, and Sheila was obviously devastated when Prince died of an accidental overdose in 2016.

Sheila has performed as part of various Prince tributes in the years since the singer’s passing. At the 2020 Grammys, she took the stage with Usher and FKA Twigs, and at the 2016 BET Awards, she was joined by Stevie Wonder and more for a special performance.