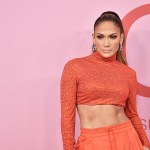 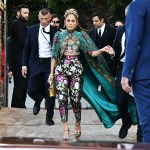 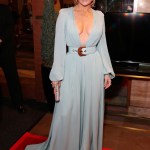 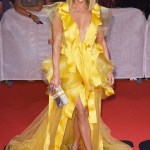 Jennifer Lopez ‘loved getting’ her pink diamond ring from Ben Affleck during the pair’s engagement in the early 2000s, and revealed the moment Barbra Streisand asked to see the diamond!

Multi-hyphenate talent Jennifer Lopez looked back at her past during her April 20 interview with At Home With Apple Music hosts Zane Lowe and Rebecca Judd. The Hustlers star, 50, spilled details on something she hasn’t publicly addressed in years — her engagement to Ben Affleck, 47. While telling the two hosts and fellow guests Dua Lipa and Charli XCX that she’s been “watching movies” with her kids — twins Emme and Maximilian, 12 — she brought up that the trio have really been enjoying old movie musicals starring living legend Barbra Streisand. Oddly enough, Barbra was the one who wanted to see J. Lo’s ring nearly two decades ago!

“I met her [Streisand] at an Oscar party, years ago, and I was at the time engaged to Ben Affleck, and  — she’s really into diamonds, which I didn’t know,” the performer revealed. “He had given me a pink diamond, which got a lot of press and was [waves hands] whatever. – I loved getting it, don’t get me wrong – So, she came up to me, and like, she’s heard of it.”

Completely starstruck by meeting the Funny Girl actress, J. Lo confessed that she was “dying because it’s Barbra Streisand and I’m like, ‘Oh My God.’ And she’s like, ‘Can I see your ring?’ And she asked me about the ring, but then she asked me – and I thought it was so strange – about being famous, and how I handle it.” J. Lo confessed that she felt like she “totally fumbled the whole moment,” recalling that she told the Oscar-winner, “I don’t really think about it.”

Ben and J. Lo, or as the media dubbed them, “Bennifer,” began dating after J. Lo’s second divorce from Chris Judd in 2002. By November of that year, the pair were engaged. Things went south for the high-profile couple, though. By January 2004, the two broke up an J. Lo experienced what she has described in her November 2014 book, True Love, as her “first real heartbreak.”

Following their split, J. Lo married her longtime friend, Marc Anthony, and Ben went on to marry Jennifer Garner. The pair each welcomed children with their aforementioned spouse, before both going through their respective divorces in 2014 and 2018. Now, J. Lo is happily engaged to former Yankees player Alex Rodriguez and Ben has taken up with acclaimed Knives Out actress Ana de Armas.

The former couple, however, are apparently on good terms. Ben confessed that he felt J. Lo is “the real thing,” in an unreleased segment from his profile with The New York Times. The two had worked together on the films Gigli (2003) and Jersey Girl (2004), and Ben had clearly seen J. Lo’s most recent film Hustlers. “I keep in touch periodically with her and have a lot of respect for her. How awesome is it that she had her biggest hit movie at 50? That’s f**king baller.”