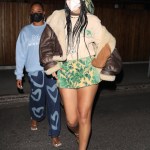 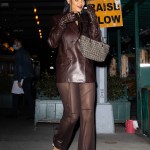 Rihanna showed off her bold side when she fearlessly addressed her fans’ anticipation over a new album and admitted she’s focusing on ‘trying to save the world’ right now in a recent Instagram livestream.

Rihanna, 32, doesn’t want to hear anymore questions about a new album and she’s not afraid to say it! The singer recently went live on Instagram to chat with fans during the current coronavirus pandemic and she couldn’t help but address those in the chatroom who were focusing more on questions about her next record than her efforts in helping the world fight the virus. “If one of y’all motherf**kers ask me about the album one more time when I’m tryna save the world, unlike y’all president….on sight,” she said to the camera while wearing sunglasses and showing off long braids in her hair.

Although RiRi didn’t say his name outright, she was most likely referring to President Donald Trump, 73, whose been criticized by some for not taking the pandemic as seriously as he should. The “Stay” crooner has been working hard to do her part to help the tough situation caused by the virus, including donating $5 million to global coronavirus relief via her Clara Lionel Foundation. She also pledged to donate another $1 million alongside Jay-Z, 50, to help those who have been affected in Los Angeles and New York and has been aiming her efforts at domestic violence victims who are at risk of the violence getting worse due to being at home.

Since Rihanna’s trying to flatten the curve of the pandemic while it continues to rise, it’s easy to understand why she wants to make sure her efforts are a priority over the new album right now. The upcoming music release, which some people are calling “R9” will be her ninth studio album and although she has yet to confirm details about a release date or what will be on it, a source EXCLUSIVELY told us she’s motivated to get it done this year. “Rihanna has over a hundred songs either fully recorded and produced, various beats and tons of lyrics and plenty of unfinished songs scattered around for consideration for her next album,” the source EXCLUSIVELY revealed to HollywoodLife. “It has been a struggle to get the right songs needed for a full and complete album to her liking and she knows that her fans are jonesing for more from her and now with the world as it is, it is putting all her focus to get new music out there quicker than she anticipated.”

“If one of y’all motherf*ckers ask me about the album one more time when I’m tryna save the world unlike y’all president… on sight!”

We look forward to hearing more about Rihanna’s new album once the pandemic is not an issue in the world anymore. We’re sure it will be worth the wait!