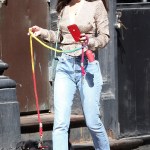 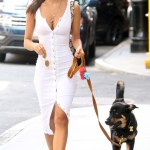 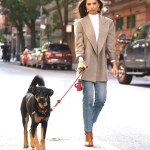 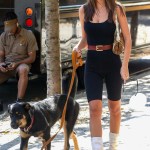 Emily Ratajkowski’s beloved pooch Colombo made a run for it outside her fence! Luckily, she was able to get him back inside safe and sound.

Emily Ratajkowski, 28, went into full-panic mode after her dog got loose! The model was seen visibly stressed with her hands above her head as she stepped outside of her Los Angeles home on Thursday, April 9. Accompanied by her husband Sebastian Bear-McClard, the pair could be seen outside her fence ordering the German Shephard to get back inside. Colombo seemingly made a run for it as he ran past the gate, and a barefoot Emily was able to get him back in the home before he was struck by a car or went missing.

Despite being home, the Inamorata designer looked more stylish than ever as she braved LA’s wetter-than-usual weather. Emily opted for a two-piece cream “Lori” ensemble by LA-based brand LESET, consisting of a long-sleeved, button-up cardigan and a matching straight leg sweater pant. The brunette kept her hair down for the sidewalk debacle sans shoes, adding a touch of glam with a gold pair of hoop earrings. Although makeup free, her perfect, blemish-free complexion was on full display and she looked more gorgeous than ever. For his part, Sebastian was casual in a blue hoodie, gray shorts and a black pair of Nike sneakers.

Los Angeles is a change of scenery for German Shepherd Colombo, who usually resides in New York City with his fashion designer mama and movie producer dad.

Emily made the move to the west coast after New York City became the epicenter of the deadly COVID-19 outbreak. The dog has become quite the star over the past few months, often taking center stage in paparazzi photos on his daily walks with Emily. Perhaps he has a modeling career of his own in the future?

Earlier that day, Emily showed off her stylish cream outfit in a photo and in her Instagram story. Answering a question from a fan about she’s easing anxiety, Emily said “There’s a breathing exercise that maybe sailors do that my therapist taught me where my breath in through your nose and you make a line, then you breath out and make another line — and you make a square, and it help calm you.” Shortly after, the model cheekily straddled her husband while wearing the outfit and snapping a flirty mirror selfie while Colombo lounged along with the them,.