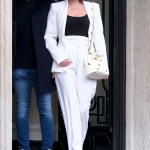 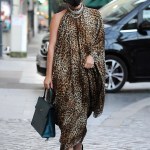 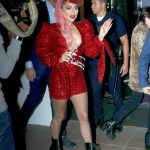 Lady Gaga has always been able to suffer for her extreme fashion. But for a new photo shoot, she actually had to be carried around as her voluminous pink gown couldn’t get caught in the dirt.

There’s nothing Lady Gaga won’t do in the name of fashion. But when it came time to shoot her May InStyle cover, she needed a little help. The 34-year-old wore a gorgeous hot pink voluminous gown, but the photo shoot was underneath a tree and amongst some bushes. There’s no way that haute couture was about to be ruined, so a burly assistant picked her up in his arms and carried her to the location, with her elaborate gown bunched up underneath her.

In the behind the scenes video, Gaga is seen in full glam with pink hair, and a large leather neck choker is around her neck with giant silver spikes coming out of it. She has on big silver metal cuffs and has her arms crossed over her chest to keep everything in place. She yells a dramatic “Fa-shun” as she’s being carried to the set then lets out some hearty laughs.

It was all worth it, as in the final pics that made the magazine, it looks like she’s emerging from the brush like a fashion wild animal in the gown, which features many layers of satin and tulle. You’d never know that she needed to be carried to the location and that there was a whole team around her to make the photos happen. Yet again, Gaga proves she’s the fiercest force for fashion.

Gaga was to be the cover star to promote her new album Chromatica, which was originally set to be released on April 10. But she’s put that on hold due to the COVID-19 outbreak and has rallied a number of artists together for a two-hour special, One World: Together at Home, which will be broadcast on all major television stations on April 18. She partnered with the international advocacy organization Global Citizen to raise $35 million (and still going) for the World Health Organization’s Covid-19 Solidarity Response Fund.

Gaga personally called up the heads of major corporations to secure donations so that the telecast wouldn’t be a fundraiser via viewers. She just wants people to kick back and enjoy the likes of Billie Eilish, Kacey Musgraves, John Legend, Stevie Wonder and more performing from home so that it entertains everyone else in America under lockdown due to the virus. Gaga even enlisted the top three major late night show hosts Jimmy Fallon, Jimmy Kimmel and Stephen Colbert  to do the emcee duties. Talk about hustle, she put this all together herself by placing all of the calls and making all of the requests so that the show happens.