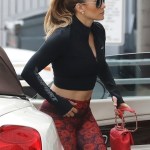 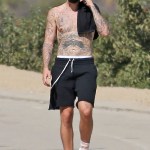 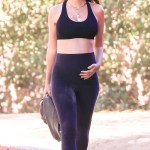 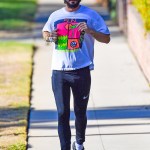 It’s 1982 all over again, as Jane Fonda brought back her iconic workout to join TikTok. For 82, she’s still got all those killer exercise moves.

In the early 1980’s, Jane Fonda developed a side-gig from Academy Award-winning actress to aerobics queen. She even developed the Jane Fonda Workout method, and now she’s bringing it back in 2020 all in the name of drawing attention to the climate crisis. The 82-year-old film icon joined TikTok on April 2 and wowed the world with her workout moves. Since everyone is stuck at home in self-quarantine because of the coronavirus, Jane felt the world needed to exercise along with her to save the planet.

Jane’s body looks amazing, as she’s wearing a tight, long-sleeved red workout top and blue workout pants The exercise guru inside Jane clearly never left her, because she totally takes command in the TikTok video. She’s seen on her side laying on a blue yoga mat inside a naturally lit room of her home, with french doors behind her, and an exquisite rug in front of her.

“Hello TikTok. My name is Jane Fonda and I’m going to bring back the Jane Fonda Workout during this home sequestration, so come on and do it with me. Lift up and down, lift up and down,” as she did perfectly executed leg lifts. Jane’s 1982 workout tape was revolutionary in its time, getting people to exercise along at home with her via a VCR cassette that sold 17 million copies.

Jane says she’s bringing back her workout sessions every Friday for the sake of planet Earth. She’s been arrested during numerous “fire drill Friday” protests bringing attention to climate change and this is her latest way to focus on the issue. In her caption Jane wrote, “Hello Tik Tok! I’m bringing back the Jane Fonda Workout to fight the climate crisis. Join #firedrillfriday 4/3 @ 11AMPT #happyathome #indoorworkout”

The video then cut to Jane standing in a gorgeous orange jacket with her light grey hair perfectly coiffed. She then said there’s already too many TV and online workouts available and that, “What I really want you to do is work out with me for the planet,” and begged people to pay attention to the climate crisis. So it sounds like her Apr. 3 class is going to be a one-off, but it should be spectacular!