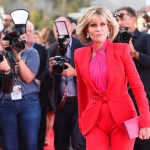 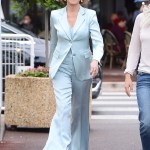 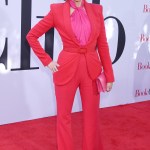 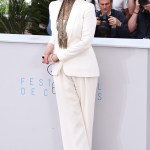 Jane Fonda looked bold and beautiful in a fitted suit for the cover of Elle Magazine, where she gave an insightful interview on using her platform and putting herself ‘on the line’ for vital political causes.

At 82-years-old, Jane Fonda is just coming into her power as an activist. The Oscar-winning actress posed on the cover of Elle‘s April 2020 issue, where she looked fierce and fashionable in a black turtleneck bodysuit by Falke and black and silver suit coat that flared at her waist with complimenting silver trousers by Alexander McQueen. Fonda’s silver hair was styled with breathtaking volume, as the actress showed off her rings by Tiffany & Co. and finished off the ensemble with a pair of pumps by Christina Louboutin. The entire look was styled by Arianne Phillips.

But it’s not her impeccable fashion or ageless looks that have landed Fonda on the cover of the magazine. The actress has been a pioneering figure in Hollywood for balancing her lucrative acting career with her political activism. “When you’re famous, you have this incredible potential platform, but how do you use it?” she shared with the outlet. The actress ultimately came to the conclusion,  “I have to put myself on the line.” And soon, the Klute Oscar winner was making political activism a pillar of her platform.

Through the Vietnam war to today, Fonda’s political work has been a driving force outside of the roles she plays on screen. Starting in October 2019, Fonda has been leading a coalition to the steps of the Capitol in Washington D.C., pressuring the senate and congress alike to take action on climate change. Dubbed “Fire Drill Fridays,” Fonda has been joined by famous faces like Lily Tomlin and Ted Danson. She was even arrested and spent a night in jail for her protest.

“I’m white and I’m famous and I think orders came down from the attorney general to handle me with kid gloves,” she shared. But that didn’t make her night in jail easier. The 82-year-old used her coat to make the mattress she slept on softer and could hear other inmates sobbing and screaming through the night. Fonda, however, remained resolute in her cause. “It’s very hard in life to find a way to align your body with your deepest values, and that’s what civil disobedience can do. Even though you’re being handcuffed and put in a situation where you have absolutely no control, it’s like stepping into yourself. I have chosen to put myself in this position where I lose all power because of something I believe in. And it’s incredible.” Now under strict guidelines amid the COVID-19 outbreak to stay at home, Fonda is taking her crusade to the digital world. Starting April 3, Fonda will move her “Fire Drill Fridays” to a virtual space, where fans and volunteers can text a number to stay up to date with what they can do. At her age, Fonda is by no means giving up. “I’m 82, which is very useful because people say, ‘Well, gosh, if she can do it, I can do it, too.’”