Chrissy Teigen and John Legend are getting their vitamin-D as the ongoing coronavirus outbreak continues. The model, 34, and singer, 41, were spotted running around on the beach in Malibu on Monday afternoon. Chrissy and John appeared to be playing a game of catch by the oceanside.

The Cravings author wore a black and yellow sundress for the sunny outing. Chrissy went makeup free with a messy top knot. Meanwhile John, who sported a thick beard, rocked black pants and a matching t-shirt.

Chrissy and John’s 1-year-old son Miles and daughter Luna, 3, were not present in the photos. Yet, they are there with the couple, as seen on Chrissy’s Instagram Stories. She shared multiple photos of her kids, one of which showed John holding Luna near the the ocean. Chrissy posted videos of her and Luna playing with animal filters on the beach. She also shared a video cuddled up to Miles. 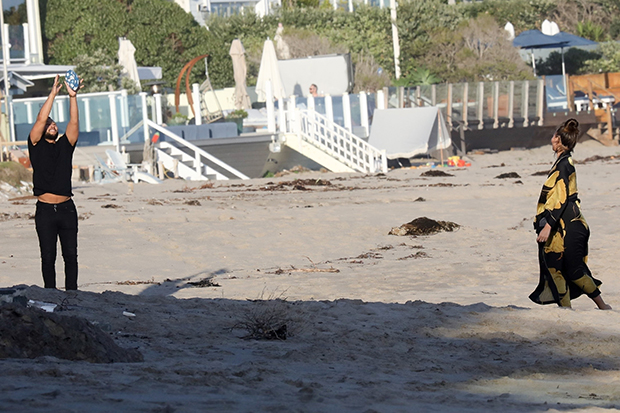 John Legend and Chrissy Teigen on the beach in Malibu on Monday, March 16, 2020. (Photo credit: BACKGRID)

It’s unclear if Chrissy and John are at a rental home in Malibu, or their permanent residence in Beverly Hills. However, the state of California is under quarantine, as implemented by Governor Gavin Newsom . He also that announced that residents 65 and older must undergo self-isolation.

Meanwhile, Arnold Schwarzenegger, former Governor of California from 2003-2011, put out his own video message to the public, addressing social distancing to stop the spread of coronavirus.

“See, the important thing is that you stay at home, because there’s a curfew now. No one is allowed out. Especially someone who is, like, 72 years old (referring to himself). After you are 65, you are not allowed out of the house anymore in California. So we stay home and we eat here,” the actor turned politician said as he casually fed his pet donkey named LuLu and miniature pony, Whiskey.
The Terminator star then told his animals: “We don’t go out, we don’t go to restaurants, we don’t do anything like that anymore here.” And, “public gatherings and “gymnasiums” are “out the window” now.

Schwarzenegger shared the video on Twitter with the caption, “Stay at home as much as possible. Listen to the experts, ignore the morons (foreheads). We will get through this together.”