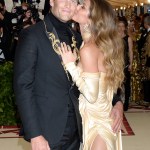 With Tom Brady about to become a free agent, the NFL Icon needs to decide where he’s going to end his football career. No matter what he decides, we’ve EXCLUSIVELY learned that his wife, Gisele Bundchen, is behind him 100%.

Forget the Ides Of March. For New England Patriots’ fans, March 18 — the day Tom Brady enters free agency — is the date their fates are decided. The 42-year-old quarterback will likely sign the last NFL contract of his career, and at the moment, it’s not a given that he’ll stay with the Pats. Wherever Tom winds up, his biggest fan, Gisele Bundchen, 39, is sure to happily follow. “Gisele knows that Tom has dedicated his life to football, and although a decision hasn’t been made yet, all she ever wants is for him to be happy,” a source EXCLUSIVELY tells HollywoodLife. “She will support him no matter what decision he makes, whether it’s to stay with the Pats or to move and play for another team.

“Like any husband and wife, they discuss what is best for their family and will come to a decision when the time is right. At the end of the day, they are blessed and have so much to be thankful for. There really is no wrong outcome,” the source tells HollywoodLife. Gisele and Tom have two kids – Benjamin, 10, and Vivian, 7 – to consider when deciding if they’re going to stay in Boston with the Pats or pack up for greener pastures. But, what does Tom – the 6-time Super Bowl Champ, 4-time Super Bowl MVP, and the man many consider to be the “greatest of all time” – want?  He has reportedly gone more than a decade without being paid “as an elite player,” according to NBC Sports, so is he aiming for a big payday?

“The Tom Brady sweepstakes will be at an even more fever pitch in a little over a week, and Tom is going to listen to all the offers that are sent his way, especially from the New England Patriots,” a second source tells HollywoodLife EXCLUSIVELY. “As much as he is looking to get paid, he still wants to win. There are so many variables on how he is going to make his decision, but money and years on his future contract are at the top of the list.”

“He wants at least three years with as much as 30 million or more a year,” the source tells HollywoodLife, adding that “what is right for his family” is also a major priority for Tom. “Gisele and the kids are a big part of the decision making. They have been talking, and they are all in agreement on how Tom is going to treat free agency.”

Don’t expect Tom to field potential suitors for a while, as the source says he wants to “make his decision pretty quickly and not drag it out too long.” If the Pats come through and give him the deal he wants, he has plans to make all the Irish eyes in Beantown smile. “He has also considered making an announcement on St. Patty’s Day if he chooses to stay with the Patriots,” the source adds. “He has talked about how on social it would be cool, and he could say something along the lines of, ‘It is St. PATty’s day!’ if he ends up signing with New England on his social platforms.”

“But there is also the potential likelihood that Las Vegas or the Chargers or a few other teams that are in the mix might make an amazing offer for him,” says the insider. “Everything is on the table. It is going smoothly because he has the full support of his family, and that goes a long way because it is one less thing to worry about.”