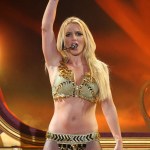 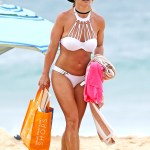 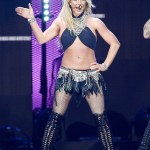 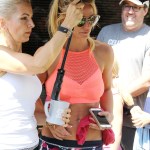 Britney Spears’ son Jayden spilled so much tea about his mom’s life in an Instagram live video that went viral. We’ve got how she responded to what her son had to say about her quitting music.

Britney Spears‘ 13-year-old son Jayden James Federline went on an Instagram live session on March 3 to say that his mom might be quitting music, how he really hates his grandfather and that he’s cool with Brit’s boyfriend Sam Asghari, 26. Either Britney hasn’t seen it yet, or she’s not letting on how she feels about her son sharing so much personal information. In her first Instagram posts since Jayden’s tea spilling, she gave birthday love to Sam, and showed off more pics wearing what she claims is her “grandmother’s bathing suit.”

Then she posted more photos wearing the plunging white bodysuit with lace sleeves that she has claimed her is “grandmother’s bathing suit.” Although it seems awfully racy for the 1950’s when either one of her grandma’s would have been in their 20’s or 30’s to wear it. “None of these photos are retouched or edited …. they are raw and real !!!!! 🌸🌸🌸💋💋💋,” she captioned two pics wearing the garment with a bright red background. She’s posted numerous pics of herself in the outfit over the past few days, and her fans are wanting to know if what Jayden said is true about her quitting music.

In the Instagram live, Jayden said,  “Actually, I haven’t seen her doing a lot of music at all. I don’t think that … I don’t know, dude. I don’t even know. I remember one time I asked her, I said, ‘Mom, what happened to your music?’ and she was like, ‘I don’t know, honey. I think I might just quit it.’ I’m like, ‘What? What are you saying? Like, do you know how much bank you make off of that stuff?’” He also called Britney’s dad Jamie Spears — who has been her conservator since her 2008  —  “a jerk” and “he’s a pretty big d*ck.” Jayden said of his grandpa, “he can go die.” Ouch! On the positive side, Jayden approves of is mom’s boyfriend, saying “I like Sam. He’s good. He’s nice. He’s a really good dude.”

Fans in the comments are naturally concerned about what Jayden had to say. felipefresteiro asked, “Britney, is what you son said on his instragram live the truth? You really want to quit music? 🥺😭” while user martincoppolaa pleaded, “DON’T QUIT MUSIC PLEASE.” A fan in portuguese begged Britney to “Call Jayden now!” Usersagalogrens told her, “I’m worried about you queen,” while fan craigtshipley wanted to know, “BRITNEY GIRL WHAT IS GOING ON.”