They’ll be there for us…one more time. The cast of Friends has announced that their reunion special is a go at HBO Max. On Feb. 21, Jennifer Aniston, Courteney Cox, Lisa Kudrow, Matthew Perry and David Schwimmer all simultaneously posted the same promotional photo of the cast from back in the day with the caption, “It’s happening @HBOMax.” Matt LeBlanc also dropped the same “It’s happening” announcement, but used a photo from the cast of M*A*S*H*,  which actually confused some fans who weren’t familiar with the 1970’s CBS Korean war set medical drama.

Our sister site TV Line reports that the unscripted reunion will tape on stage 24 on the Warner Brothers lot in Burbank, CA. That’s where Friends filmed its 10 year run for NBC. All six cast members will be executive producers on the telecast, along with the original series EPs Kevin Bright, Marta Kauffman and David Crane. Those three had been adamant over the years that Friends would never see a revival, as the show ended on a perfect note. But this is not a reboot with the characters from the show. Instead its the cast members getting back together to relive their favorite moments from the iconic sitcom.

“Guess you could call this the one where they all got back together — we are reuniting with David, Jennifer, Courteney, Matt, Lisa, and Matthew for a HBO Max special that will be programmed alongside the entire Friends library,” Kevin Reilly, CCO of HBO Max, said in statement to TV Line. 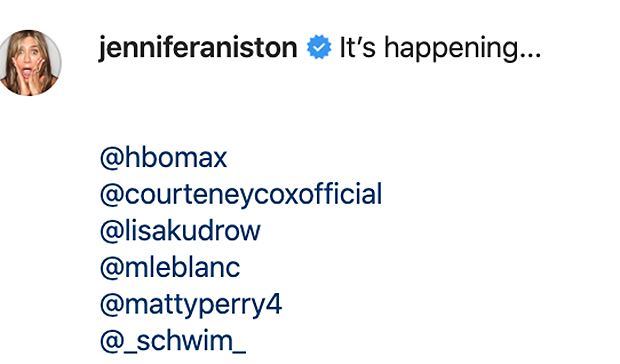 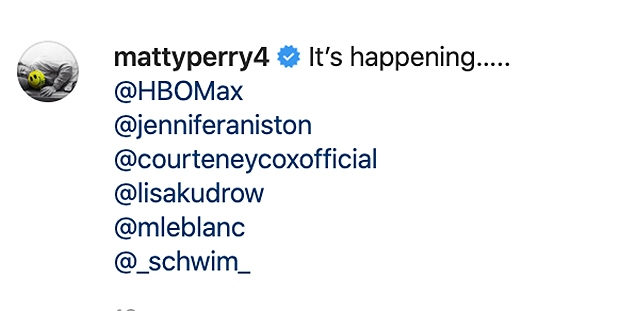 “I became aware of Friends when it was in the very early stages of development and then had the opportunity to work on the series many years later and have delighted in seeing it catch on with viewers generation after generation. It taps into an era when friends – and audiences – gathered together in real time, and we think this reunion special will capture that spirit, uniting original and new fans,” he added.

Jennifer Aniston nearly broke Instagram on Oct. 15, 2019 when she finally joined, posting a photo of all six cast members together having dinner. She captioned it, “And now we’re Instagram FRIENDS too. HI INSTAGRAM 👋🏻.” The final holdout to the ‘gram was Matthew Perry, who joined in early Feb. 2020. The co-stars have remained tight over the years since the show left the air. The HBO Max special will mark the first time all six have been together on TV since a group interview on The Oprah Winfrey Show on May 7, 2004, just before the series finale aired.