Gabrielle Carteris, 59, is giving fans of Beverly Hills, 90210 hope that their favorite characters could somehow return to the small screen after the BH90210 reboot’s shocking cancellation last November. “I think there’s hope for something,” Gabrielle told HollywoodLife EXCLUSIVELY at the Casting Society of American’s Artois Awards in Los Angeles on Jan 30.

The actress, who played Andrea Zuckerman on the original long-running 1990s hit series, as well as a satirical version of herself on the recent reboot, revealed that although the reboot only lasted one season, it actually gave her closure. “I loved doing it. For me I got a lot of closure. There were a lot of open things left when I left [the show at the end of Season 5], because everything was happening all at once. I was moving on to my talk show and saying goodbye was, well I just didn’t feel closure. For me this time and being with everybody, I really feel really blessed. I feel really rested, right? And so I’m cool.” She then alluded to another reboot or some sort of continuation of the original series being in the works. “And I think something’s going to happen, I don’t know what that is but something,” she coyly concluded.

For those who may not know, in Season 5 of Beverly Hills, 90210, producers accommodated Gabrielle Carteris’ real-life pregnancy by writing a pregnancy storyline into the show for her character, Andrea. However, the producers were reportedly unhappy with the more adult direction of her character, and Gabrielle was written off the show at the end of the season, according to Entertainment Weekly.

While the original 1990s TV series, Beverly Hills, 90210, was a classic scripted show, the follow-up series had Gabrielle and her co-stars, Brian [Austin Green], Ian [Ziering], Jason[Priestley], Jennie [Garth], Shannen [Doherty] and Tori [Spelling], playing themselves in a heightened version of reality inspired by their real lives. The 6-episode series, which first debuted on Aug. 7, 2019, saw the cast cope with launching a reboot of their TV series, Beverly Hills, 90210. 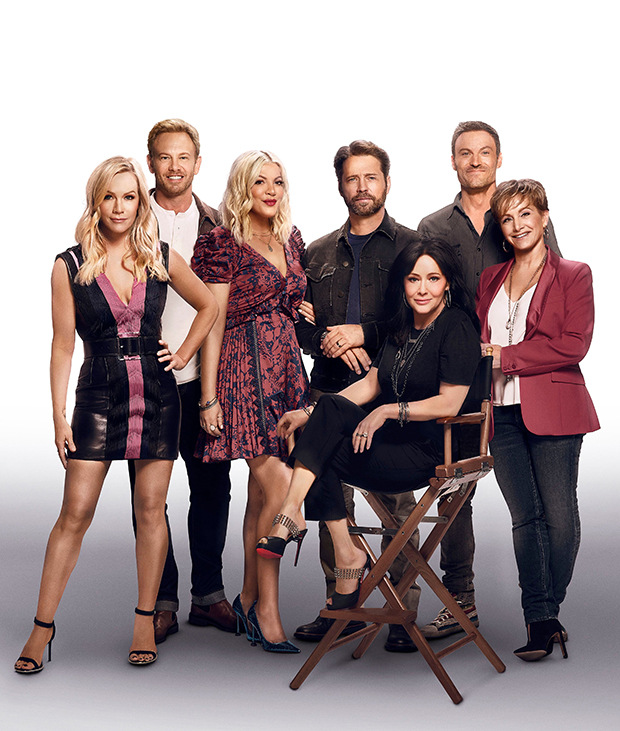 In the reboot, the cast revealed they hadn’t seen each other in 19 years — not since the original series ended in 2000 — and they were forced to reconcile their new lives and their complicated histories together. But in real life, they actually remained tight throughout the years, according to Gabriel, who said in 2019, “I keep in touch with them…[we] were close through all those years.”