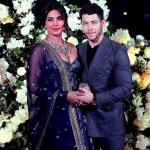 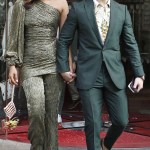 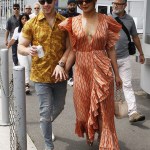 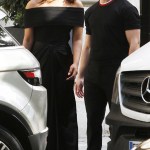 Priyanka Chopra has done it again! The actress looked stunning in a quirky couture shirt dress when she stepped out with her husband Nick Jonas in Milan.

Priyanka Chopra, 37, sizzled in a gorgeous couture outfit on a European getaway with hunky hubby Nick Jonas, 27. The loved-up pair walked hand-in-hand in Milan, Italy on Feb. 15, after dining at the upscale Paper Moon restaurant and hitting up Ceresio 7, a gym which also has a full service spa, rooftop pool and restaurant. Never one to shy away from a bold fashion moment, Priyanka stepped out in a quirky shirt dress by Moschino x Universal. The colorful mini featured a bold print of Dracula on the front and had a plunging neckline. She paired the thigh-skimming fit with a pair of black knee-high heeled boots which she complemented with an over-the-shoulder crocodile print handbag. The Bollywood star’s dark brunette tresses looked incredible, as she styled her hair in a bouncy blow dry with the curls falling gently below her shoulders. She also rocked a bright red lipstick and protected her eyes from the sun with skinny black sunglasses. Talk about glam!

Priyanka added a further touch of glamour with oversized gold hoop earrings and a french manicure with a pointy tip. Her beau Nick looked just as suave in a head-to-toe black ensemble. He rocked a black blazer, worn over a simple white shirt, black pants, and dress shoes. The singer is currently on tour with his brothers Joe Jonas, and Kevin Jonas, playing shows around Europe to packed out crowds. His Italian getaway with Priyanka was presumably short and sweet, as Nick was required to be in Madrid, Spain the following day to play a concert at the WiZink Center with his bros.

The pair celebrated their one year wedding anniversary in Dec. 2019 after tying the knot in multiple lavish ceremonies in late 2018, and they’ve been absolute couple goals ever since. They recently stepped out on the Grammys red carpet together, with Priyanka wearing a sparkling gown with a sexy plunging neckline that went beyond her belly button. The gown also featured gorgeous beading and detailing, including fringe sleeves. Priyanka’s hair was styled super-sleek for the date night with Nick, who looked dapper in a gold suit. The two appeared so in love on the red carpet. They even took a moment to goof off, with Priyanka sticking her tongue out at Nick while they posed for photos.

The couple were total red carpets standouts during the 2020 awards season, which was in full swing throughout January. They attended the Golden Globes together, and looked so in love on the red carpet. “[Priyanka and Nick] were hand-in-hand as they walked inside,” an eyewitness told HollywoodLife. “He kissed her on the cheek and cusped the small of her back as he led her to the show.” Priyanka wowed in a bright pink gown. She completed her look with a dazzling diamond necklace and a bold red lip. Priyanka’s look was the epitome of Old Hollywood glamour!