Hours after Chris Brown, 30, posted a super risqué photo of Ammika Harris, 26, she responded by sharing a shirtless snap of the “No Guidances” singer (SEE PIC HERE). The pair, who share a two-month-old son Aeko Brown, have not been together romantically since before their bub was born in Nov. 2019, however it seems like the pair might rekindling things. On Feb. 7, Chris posted a sexy snap of his ex lying on her stomach on the ground, next to a bed. In the shot she wears nothing but a backless crop top and black pantyhose with holes in the side. Her eyes are closed in the sizzling snap as she pouts and has her long brown tresses flipped to one side. He captioned the photo simply with a purple devil emoji.

Three hours later, Ammika took fans by surprise when she posted a shirtless photo of Chris, on stage at a concert. The pic features a bright orange backlight as Chris puts his left hand up to his face, showing off his watch. He also wears a necklace and shows off his toned abs, with his jeans worn extremely low. To top it all off, she also captioned the photo with a single, purple devil emoji. The question on everyone’s lips is: what does this mean?! The pair have also turned off comments on their posts, therefore fans can’t theorize in the comments section! The posts come just days after Chris shared another photo of Ammika, without a top, hugging Aeko close to her chest.

Despite this shout-out to Ammika, and their latest pics of each other, it’s unclear if the exes are dating again. On Jan. 27, the singer led fans to believe he still had his ex Rihanna, 31, on his mind after uploading a cryptic post to his Instagram Story. It showed a video of Breezy smiling during an old video, and Chris wrote over the clip, “When someone asks, after all this time… why are you still in love WITH HER? My ANSWER: BECAUSE TIME HAS NO RELEVANCE WHEN IT’S UNCONDITIONAL.” Of course, Chris didn’t specify which “her” — AKA, which ex-girlfriend — he was “still in love” with. 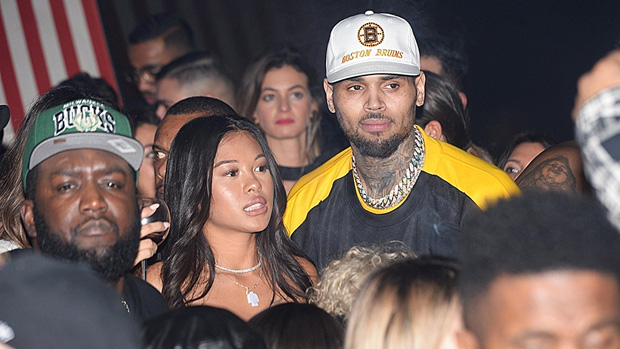 A week earlier, social media went wild over the status of her relationship with Breezy after she posted a photo on Instagram of herself wearing several gorgeous diamond rings on Jan. 10. There’s a connection here as Chris was wearing a pair of diamond rings back in December in the photo he shared to announce their son’s birth. This led many to believe that the two of them are secretly married to each other, although each has yet to comment on the blinged-out situation. Will they, or won’t they get back together? We’ll have to wait for the official word from Chris or Ammika!
Articles Trending Now