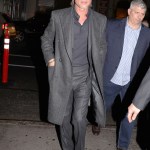 The Governor’s Ball following the 2020 Oscars is going to have a heavily plant-based menu. Chef Wolfgang Puck tells us what foods he’ll be serving the hungry stars.

Since so many celebrities have gone vegan or vegetarian, so goes the meal for the 2020 Governors Ball following the Oscars ceremony.The menu will be heavily plant-based.  HollywoodLife.com spoke EXCLUSIVELY to Chef Wolfgang Puck, who is in charge of this year’s menu during his Jan. 31 taste testing. “Well, we always had vegan dishes. We just never told anybody. We didn’t say, “Oh, we do vegan dishes. We always had them. I never told anybody we do farm to table,” he explained. “Did I tell anybody? No. I just said it’s normal to get the best ingredients.”

As for what Wolgang prefers, “I always love pasta, so it’s really simple to make a great vegan dish with pasta. We’ve got mushroom. We have beautiful truffles, so we always get ready for everything. So, if somebody wants something special, we can make it because we have 200 chefs in the kitchen and 600 waiters,” he continued. That’s got to be a relief for the carnivores at the event who would still like a big steak instead of vegan and plant-based fare.

Wolfgang isn’t sure yet what he’ll make for Brad Pitt, who is a near-lock to win Best Supporting Actor for his work in Once Upon a Time In Hollywood, after picking up every trophy this awards season. But he does know what his co-star and Best Actor nominee Leonardo Di Caprio will want made to order.  “We’ll see what he (Brad) loves. But, I did the SAG Awards and Leo DiCaprio said, ‘What can you give me, something vegan?’ He wanted vegan. We made a vegan pizza. He ate it so fast. He said, ‘Oh, can you bring another one?'” Wolfgang told us, adding, “We’ll have it on deck on Sunday, for sure.” That’s good news for Leo!

Wolfgang keeping with a primarily plant-based menu follows in line with the Motion Picture Academy’s other events. The menu at the Oscar nominees luncheon on Jan. 27 was completely plant-based, and the finger food served before the Feb. 9 ceremony will be 100 percent plant-based as well. In its Jan. 27 press release, the Academy also noted that the Governor’s Ball menu will be “70% plant-based and 30% vegetarian, fish and meat.”