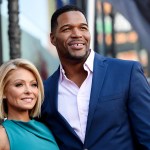 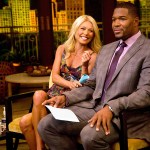 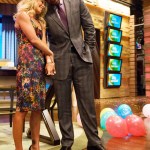 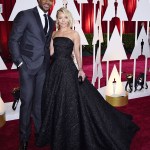 Michael Strahan didn’t think he’d be Kelly Ripa’s ‘sidekick’ when he took the job at ‘Live!’, he says in a new interview. Despite his dramatic departure from the show, he swears he doesn’t ‘hate’ his former co-host.

Nearly four years later, Michael Strahan, 48, is opening up about his abrupt departure from Live! With Kelly and Michael. Amid rumors that his and co-host Kelly Ripa‘s relationship was souring behind the scenes, Michael announced on air during an April 2016 episode that he would be leaving for Good Morning America — without telling Kelly first. Michael told The New York Times in a new interview that he doesn’t “hate” Kelly or wanted to hurt her; he just didn’t want to be her “sidekick” anymore. The Super Bowl champion started out by comparing and contrasting his television career with his time in the NFL.

“In sports, you can put as many great players as you want on a team, but if one guy out there is worried about himself, it will not work,” the Strahan, Sara and Keke host explained. “Then on television, I’ve had jobs where I got there and felt like: Wow, I didn’t know I was supposed to be a sidekick. I thought I was coming here to be a partner.” He confirmed to his interviewer that he was specifically talking about Kelly. “The mental aspect of working in TV is like it was in football. I don’t want to be on [a] show and feel like everyone else is carrying me. I want us all to be successful. I’ve done things where I went in with team concepts, and I got there and realized it’s not about team. It’s selfish, and I don’t operate well under that.”

He gave Kelly, 49, credit for being an incredible host, though. “You learn how to craft a story. ‘What did you do last night?’ ‘Oh, I had a glass of water.’ But you learn to tell the story to make it seem like the most interesting glass of water. Those are things that I learned from her,” Michael said of Kelly, who has hosted Live! since 2001. “She’s brilliant in that way. If people think, Oh, he hates her — I don’t hate her. I do respect her for what she can do at her job. I cannot say enough about how good she is at her job.”

Michael acknowledged that the way he left Live! “could have been handled better,” though. His announcement in 2016 came as a clear shock to Kelly, who, it was revealed later, had only heard the news just moments before they went onstage. She took the next two days off, along with a planned long weekend before an applauded return. She had an announcement of her own: Michael’s last episode would be in May, not September as previously decided. She hosted the show for almost a year solo, with a rotating cast of celebrity co-hosts. Ryan Seacrest came on as her permanent comrade in May 2017, officially making the show Live with Kelly and Ryan — no exclamation point.

“I didn’t wake up and say, ‘I want a job at GMA,'” Michael told The New York Times. “But it was treated as if I was the guy who walked in and said, ‘I’m leaving.’ That part was totally misconstrued, mishandled in every way… For me, it was like: Move on. Success is the best thing. Just keep on moving.”