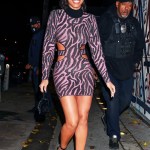 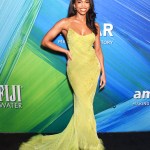 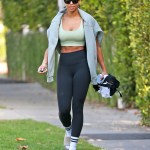 Lori Harvey looked to be in good spirits while out with BFF Asia Carter only one day after pleading not guilty in her hit and run case.

That’s what friends are for! Lori Harvey, 23, dined and dished with her equally gorgeous pal Asia Carter in Beverly Hills on Wednesday, January 22, amid the drama surrounding her hit and run case. The sexy duo hit up celeb hotspot Matsuhisa while earning some serious style points for the ensembles they wore during their big night out. Steve Harvey‘s stepdaughter stunned in a black hooded jumper and camouflage print joggers with a pair of chunky black trainers. She accessorized the overall look with a chic purse while keeping her jet black hair cascading down both shoulders. Asia (who is cousins with Lil Wayne‘s daughter Reginae, 21) opted to dress a bit more colorfully in a red and white tracksuit and white sneakers. She was spotted checking out her phone prior to her and Lori heading inside.

Their outing comes during a rough time for the social media star as she pleaded not guilty just one day earlier on Tuesday, January 21, following her alleged hit and run. She was arrested in October 2019 after apparently crashing her car into a parked vehicle in Beverly Hills. Lori was then issued misdemeanor citations for a hit and run and delaying, hinder or resisting an officer. She is due back in court on February 28 for a pre-trial hearing.

“Lori Harvey’s lawyer should get this charge dropped,” California criminal attorney and founder of California Legal Counsel Sharen H. Ghatan Esq told HollywoodLife EXCLUSIVELY on Wednesday, January 15. “There’s room to negotiate if she allows her attorney the flexibility to negotiate private one on one therapy sessions, anger management, as well as community service hours to ‘earn’ the dismissal…Let’s acknowledge how fortunate it is that there’s no actual person injured, and that there’s no driving under the influence allegation, as these are taken extremely seriously by the court.”

Another person more than likely keeping Lori cool, calm and collected in recent months is her rumored boyfriend Future, 36. The two have been spotted traveling internationally with one another including a trip to Jamaica for her 23rd birthday earlier this month.