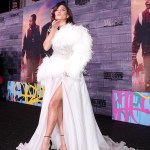 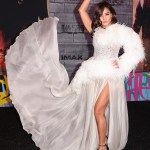 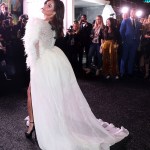 Vanessa Hudgens isn’t wasting time moving on from Austin Butler. They split after nine years exactly one week ago, and she’s already had a flirty dinner date with LA Lakers star Kyle Kuzma.

After nine years with the same guy, Vanessa Hudgens seems to want to see what else is out there right away. The news that the 31-year-old actress and boyfriend Austin Butler, 28, had split up just dropped on Jan. 14. One week to the day on Jan. 21, she was spotted having a flirty dinner for two in Brooklyn with Los Angeles Lakers star Kyle Kuzma, 24. Vanessa was smiling and laughing as she sat across the table from the 6’8″ hunk, while having a romantic candlelit Italian dinner at Lilia. You can check out the pics of their date here.

The couple had their eyes locked on each other in conversation over a bottle of red wine. Vanessa has been in the Big Apple for the past week doing promotional appearances for her new movie Bad Boys for Life. Kyle is in town with the Lakers to play the New York Knicks on Jan. 22. They both are based in Los Angeles, so if this is a start of a new romance, they’ll be able to see a lot of each other. Coincidentally, the day before the report broke that Vanessa and Austin were done, she was photographed sitting court side at a Lakers home game watching Kyle play.

Vanessa has had two back to back long-term relationships, so no wonder she looks so excited to be around a new guy. She dated Austin for nine years, beginning in 2011. Before that, she was with her High School Musical co-star Zac Efron, 32, from 2005-2010. In early 2019, Kyle was linked to Instagram model Katya Elise Henry. He was photographed aboard a yacht with Kendall Jenner, 24, and a group of pals on the 4th of July of that same year. There was no romance though, as it turned out Kendall and Kyle were simply just friends.

When news broke that Vanessa and Austin were done, there were so many HSM fans rooting for her to reunite with Zac. It even caused their nickname “Zanessa” to trend on Twitter. As nostalgic and sweet as it might be for them to find love again a decade after splitting, a reunion is unlikely. During a 2017 appearance on Access Hollywood Live, when asked if she talked to Zac much, Vanessa replied, “Um no. I’ve completely lost contact with him.”