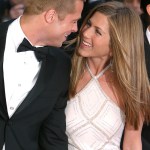 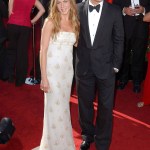 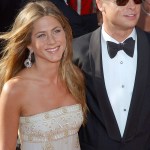 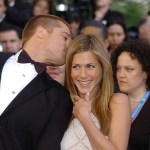 Jennifer Aniston should’ve received one more trophy at the SAG Awards for having a wrinkle-free gown. The actress revealed how she pulled off the feat — take notes.

Jennifer Aniston, 50, had to tread really carefully before hitting the red carpet at the SAG Awards on Jan. 19. To ensure no undesirable wrinkles ruined the satin on her Dior gown, the award-winning actress cranked that recline lever and leaned way back in her car seat! Jen revealed this delicate balancing act in a photo snapped before she headed off to pick up her trophy for “Outstanding Performance by a Female Actor in a Drama Series,” which she shared to Instagram a day after the award show. Jen’s peace sign is the cherry on top of the picture.

“No wrinkles… harder than it looks!” Jen joked in the post’s caption. We’ll take her word for it — Jen’s dress was impossibly silky and smooth. The gown wasn’t looking nearly as pearly, though, after a busy night of celebrating her SAGs win. There were noticeable dirt stains along the hem of the dress, but they paled in comparison to Jen’s shiny new trophy that she earned for her dynamite lead role in the Apple TV+ series, The Morning Show. Jen placed the two SAGs mementos on the rim of her marble bathtub, and her stilettos from the award show lay on the floor nearby.

“Somewhere between these two photos, my peers gave me a gift I will cherish and a night I will never forget,” Jen continued in the caption of her post-SAGs Instagram post. “Thank you @sagawards, @themorningshow, and our incredible cast and crew. Let’s get back to work!”

No wrinkles… harder than it looks! Somewhere between these two photos, my peers gave me a gift I will cherish and a night I will never forget. Thank you @sagawards, @themorningshow, and our incredible cast and crew. Let’s get back to work!

Rounding out the SAG content with this final ode. Congratulations, @jenniferaniston. ✨ #CommentsByCelebs #SAGAwards

Fans weren’t too preoccupied with any wrinkles on Jennifer’s dress, though. They were much too focused on the backstage reunion between Jen and her ex-husband Brad Pitt, 56, at the SAGs! Photos of the exes catching up quickly vent viral, thanks to their hand placement — amid their (very smiley) conversation, Brad was photographed grabbing Jennifer’s wrist as her hand rested on his suit jacket. Even Courteney Cox, Jennifer’s longtime pal and co-star from Friends, shipped the moment.

“They both embraced in a big long hug. They exchanged pleasantries and were visibly excited for each other,” a eyewitness who saw this reunion EXCLUSIVELY told HollywoodLife. “The energy they both were showing each other was as electric as possible. You can tell their is a massive respect there. They didn’t stay long as they were whisked away back towards the show room and they both signed a SAG Awards sign that all the winners have signed.”