What a bombshell! Charlize Theron, 44, killed it on the red carpet at the 2020 SAG Awards on Sunday, Jan. 19, in a gorgeous gown full of glamour. She wore a sparkling diamond crop top with a long black skirt that showed off her gorgeous long legs with its thigh-high slit. She paired the stunning dress with a beautiful pair of Tiffany & Co. diamond earrings, with a matching bracelet and rings that perfectly matched the outfit’s sparkle. The best part of her outfit had to be the diamonds she wore in her hair, which she said she wore because she, “hadn’t done her roots.” Absolutely exquisite!

At the 2020 SAG Awards, Charlize is nominated for Outstanding Performance by a Female Actor in a Leading Role in a Motion Picture for her role as Megyn Kelly in Bombshell. It’s a tough category, and she’s up against talents like newcomer Cynthia Erivo for Harriet, Scarlett Johansson for her role in Marriage Story, Lupita Nyong’ o  for Us, and Renée Zellweger for her role as Hollywood icon Judy Garland in Judy. We doubt Charlize is feeling too much pressure since this is the 6th time, she’s been up for a SAG Award! 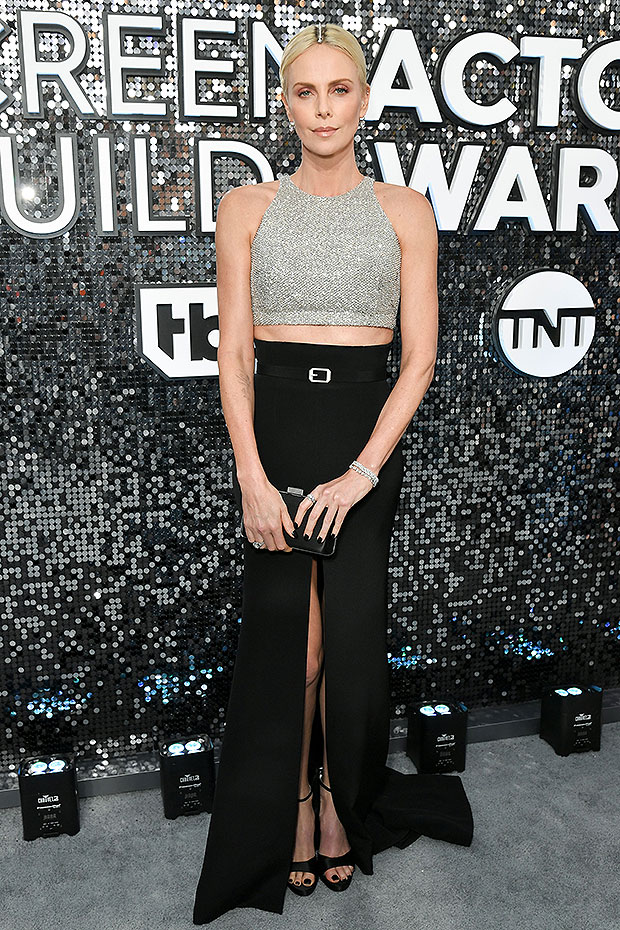 This isn’t the first red carpet that Charlize has ruled this awards season. At this year’s Golden Globes, The actress, 44, stunned in a bright green dress with one shoulder and a sultry black corset at the Golden Globes in LA on Jan. 5. She donned her signature blonde tresses in a pixie cut that she actually had dyed the day of the event! That is a lot of trust in a hairstylist.

Although this year there won’t be a host, Logan Browning and nominee Joey King were named as ambassadors for the 26th annual Screen Actors Guild Awards. The duo will participate in various pre-show events and give fans an inside look behind the scenes on social media.