Charlize Theron was born to walk red carpets. The actress, 44, stunned in a bright green dress with one shoulder and a sultry black corset at the Golden Globes in LA on January 5. — The first awards show of 2020, which honors the best in television and film.

Charlize, who wows in Bombshell as Megyn Kelly, sported her signature blonde pixie cut. While on the red carpet, Ryan Seacrest noted that Charlize looks unrecognizable as the former Fox News anchor. The actress gave much of the credit for her incredible portrayal of Megyn to Bombshell‘s prosthetic makeup designer Kazu Hiro.

“I think I had a moment to realize how lucky I was to work with who did all of those prosthetics,” Charlize said when asked about how it was to watch herself on screen in full makeup to portray Megyn. “There was this one moment that I looked in the mirror … and, to have that voice live in a face that wasn’t mine and that was such a great gift he [Kazu] gave me,” she explained, adding, “He’s an artist he’s unbelievable.” 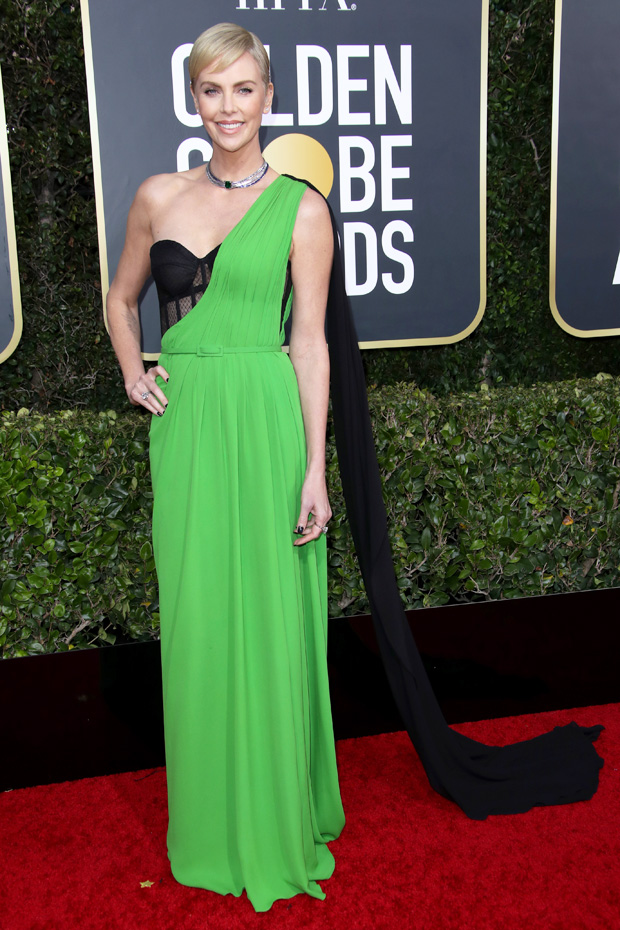 Charlize Theron on the red carpet at the 2020 Golden Globes on Sunday, January 5. (Photo credit: REX/Shutterstock)

Charlize went on to explain how important it was for her to help create Bombshell.

Related: Oscars Vs Golden Globes: What’s The Difference Between The Awards Shows?

“This was the first time in my career that I’ve been involved in that felt so timely,” she said, noting, “And, even though we got the script before, Time’s Up and the Me Too movement it really felt like I was living in an asylum, but women were coming forward and telling their stories and it’s amazing that this was the catalyst, the women at fox.”

It’s a big night for Charlize, as she’s nominated for her role as Megyn in Bombshell. The film depicts the real-life takedown of corrupt Fox CEO Roger Ailes and also stars Margot Robbie as Kayla Pospisil and Nicole Kidman, who plays Gretchen Carlson. Her first Golden Globe nomination came in 2004 for work in the film Monster.

Ahead of the Globes, Charlize reacted to the lack of female director nominees, despite some of the year’s top films being directed by women including, Hustlers (directed by Lorene Scafaria), The Farewell (Lulu Wang), Little Women (Greta Gerwig), Honey Boy (Alma Har’el), and Queen & Slim (Melina Matsoukas).

“It’s tough. It’s really, really tough. And I think it gets really frustrating when we we have to remember that women directors, especially, are just trying to get their numbers up,” Charlize said during a phone interview with the Los Angeles Times, published on December 9. “They represent 10% of our directors in the industry, and when you have a good year like we had this year with such great work, it is incredibly frustrating,” she continued, explaining, “No woman wants to get nominated because it’s the right thing to do. It’s really, really ridiculous. It’s not cool. It’s really hard, and I think it’s unfair, and it’s why we can’t stop this fight. We gotta keep making noise until we’re heard and these stories get recognized.”

Just days before the Golden Globes, which has a reputation as being the booziest awards show in Hollywood, Charlize was announced as a presenter at the 77th annual show. Other stars who will join her in the presenter’s pool including, Scarlett Johansson, Octavia Spencer, Daniel Craig, Sofia Vergara, Kerry Washington, Tiffany Haddish, Glenn Close, Will Ferrell, Kate McKinnon, Ted Danson and Rami Malek.