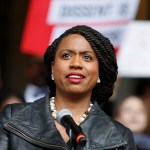 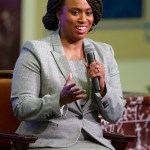 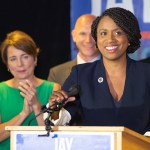 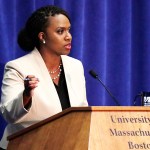 In an empowering new video, Massachusetts Rep., Ayanna Pressley, opens up about her alopecia diagnosis for the first time, and bravely shows off her bald head while discussing the hair loss.

Ayanna Pressley, 45, who is the U.S. Representative for Massachusetts’ 7th Congressional District, has revealed that she has alopecia, an autoimmune disease that causes hair loss. Ayanna opened up about the diagnosis in a powerful new video for The Root. First, she opened up about her previous Senegalese twists hairstyle — a signature look that she started wearing four or five years ago. Without expecting it, the hairstyle took on a life of its own in her political career. “I walk into rooms and little girls are wearing t-shirts that say ‘My congresswoman wears braids,'” she explained.”We receive letters from all over the globe from women who talk abut their own emancipation that they feel that I’ve given them permission for. My twists have become such a synonymous part of my personal identity and how I show up in the world, and my political brand.”

It was because of the importance of this hairstyle that Ayanna felt she had to be transparent about her alopecia diagnosis. In the video, she explained that it wasn’t until the fall of 2019 that she was first told that she had some patches on her head. “From there, it accelerated very quickly,” Ayanna admitted. “I had been waking up every morning to sinkfuls of hair.” She bravely explained that she started dreading going to bed at night because she would wake up to “more hair in the sink and an image in the mirror of a person who increasingly felt like a stranger.”

Ayanna explained that the final bit of her hair fell out on the evening before the House of Representatives voted on Donald Trump’s impeachment, so she had to be on the House floor the very next morning. “I didn’t have the luxury of mourning what felt like the loss of a limb,” she admitted. She wore a wig, but said that she felt “naked, exposed, vulnerable, embarrassed, ashamed and betrayed.”

The hardest part, though, was feeling like she betrayed all of the little girls who looked up to her because of her Senegalese twists. This is what sparked her decision to go public with her alopecia diagnosis and hair loss. “I felt like I owed those little girls and explanation,” she said. “I’m trying to find my way here and I do believe going public will help. This is my official public revealing. I am ready now because I want to be freed from the secret and the shame that the secret carries with it because I am not just here to occupy space. I’m here to create it. I want to be free. I am making peace with having alopecia. I have not arrived there. I am very early in my alopecia journey, but I am making progress every day.” At the end of the video, Ayanna took off her wig and showed off her completely bald head in a powerful reveal.