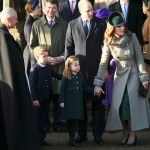 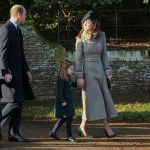 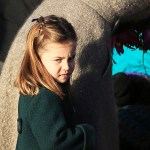 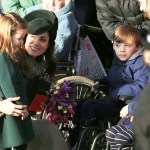 (Most) of the Royal Family has arrived for Christmas Day church services in Sandringham & Kate Middleton looks as gorgeous & festive as ever.

Merry Christmas from the Royals! As per tradition, the Duchess of Cambridge Kate Middleton and her family were dolled up to attend Christmas Day church services at St. Mary Magdalene in Sandringham, with the Queen. Kate loves a great holiday look and wore a long (and warm!) tan coat with fur detailing on the sleeves and neckline while taking the iconic walk to the church on the Queen’s estate. She paired it with a unique green hat, but Kate’s cutest accessories were Prince George and Princess Charlotte, who made their Christmas Day debuts this year alongside their parents!

Last year, recall Kate and Prince William walked side by side with a pregnant Meghan Markle and Prince Harry. Kate stunned in an all-red ensemble with a hybrid hat/headband and styled her hair in loose waves, while Meghan’s bump was on display in an all-navy look. This year, Meghan and Harry decided to skip out on the Windsor’s Christmas traditions, which include several events hosted by the Queen, and spend it with Doria Ragland, Meghan’s mom. “Having spent the last two Christmases at Sandringham, Their Royal Highnesses will spend the holiday this year, as a new family, with the Duchess’ mother Doria Ragland. This decision is in line with precedent set previously by other members of the Royal Family, and has the support of Her Majesty The Queen,” Buckingham Palace said in a statement on the matter.

The couple also were notably absent from the Queen’s Christmas lunch at Buckingham Palace, which she holds every year before traveling to Sandringham. The pair and their 7-month-old son, Archie, are in the midst of their six-week break from royal duties and reportedly traveling abroad.

Kate Middleton and her family, however, were there for it all! They even were as cute as ever in their 2019 Cambridge Family Christmas card, which was leaked early by a recipient of the card. In it, Kate rocked a floral Boden teal wrap dress, while Prince George wore madras shorts and a navy collared shirt, Prince Louis was charming in overalls and Princess Charlotte looked adorable in a checkered skirt and black tank top. Prince William held on to Louis, wearing a button-up blue shirt with casual rolled up sleeves. So cute!