Becca Tobin, 33, Keltie Knight, 37, & Jac Vanek, 32, launched the LadyGang podcast back in 2015 after connecting through red carpet events and ex-boyfriends over the years. With so much success with the podcast that tackles all kinds of topics from celebrity gossip to relationships and all kinds of real life lady issues, it was no surprise that the trio had a hit show on E!, but they’re revealing that those days are behind them — At least for now. “We can say we’re not going back to E!, but we are figuring out another medium for the actual TV show to be in,” Becca told HollywoodLife EXCLUSIVELY when we stopped by their studios to record their ‘2019 Celeb Roundup with HollywoodLife’ podcast episode which drops on Dec. 24. “Yeah, talk is a really hard format as we’ve seen this past year of television,” Keltie added. “And I think that the show that they wanted is not the show that we wanted to make. And so, it was just really hard to come to a decision about what kind of content we wanted to create.”

Though their E! days are behind them, the ladies tease they’re trying to figure out their next move which they hope will involve some sort of screen time element. “The thing that’s kind of beautiful about this whole situation is in the beginning, the goal was a TV show,” Becca said. “And in the midst of creating this brand with the podcast and all these other ventures for us, aside from TV, we’ve created our own little world. And we’ve realized that life’s a little too short to compromise with something so — This is fragile. This is the three of us — It’s our baby, so while E! was such a supportive place for us, don’t get us wrong, we had so many awesome female executives. Everybody was such a fan of the brand. But, I think that what we’ve learned is that we aren’t going to die if we don’t get another TV show, and so we’re only going to do it if it feels exactly right. And that was a really crazy realization for the three of us to make, that we’d rather kind of do it our way or no way at all.”

Between their busy careers outside of LadyGang, it’s no surprise that they are already gearing up for big things in 2020. With a clothing line, book and a tour starting in June, it sounds like things will be anything but slow for these boss ladies. “And with the book, we’re doing a huge national tour,” Jac revealed. “We’re doing a collection. So, we’re doing a summer and a fall,” Becca explained. “We’re starting with a summer collection and we’re timing it out so that we’re going to be on the road doing our book tour, which will be live shows everywhere. And then, we’ll also be going to stores and doing some pop-up stuff.” 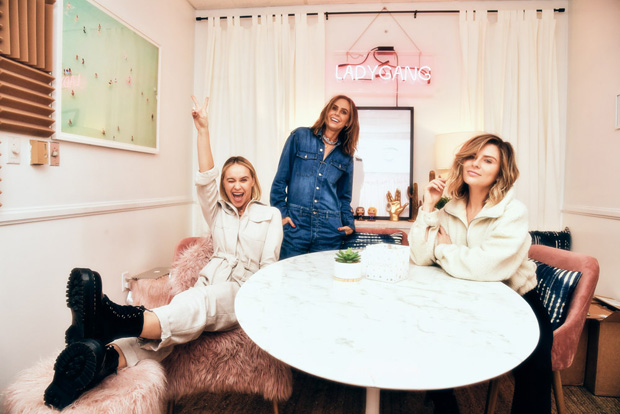 And if you can’t pick your favorite LadyGang member, that’s A-OK, because there will be interactive ways to relate to all of the ‘Gang members at once. “We went and we made this collection, and it’s in three parts,” Keltie said. “There’s the Keltie, the Becca, [and] the Jac. And so, it’s like if you’re day drinking and you want to wear your leopard cropped shirt with a maxi skirt with buttons up to your vagina, you get the Jac. If you hate to show your knees, you have the long skirt with a blazer that’s all monochromatic, very Becca.”