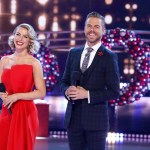 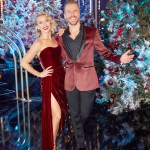 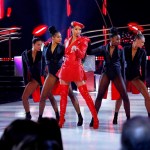 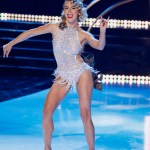 Julianne and Derek Hough are teaming up for their first-ever holiday special! ‘Holidays With the Houghs’ will feature festive performances from the brother-sister duo, Ciara, and more.

Julianne, 31, and Derek Hough, 34, are one of our favorite sibling duos so the fact that they’re uniting for their first holiday special is a real treat. Julianne and Derek will perform in show-stopping musical and dance performances throughout the Dec. 16 NBC holiday special. Since this is Houghs we’re talking about, there will be some sibling competition on display. They’ll be putting their own spin on holiday classics, as well as sharing family holiday traditions and creating new ones to come. Is there anything these siblings can’t do?

Since this is Julianne Hough we’re talking about, her wardrobe for Holidays with the Houghs is simply stellar. She rocks a number of festive outfits throughout the special, including a sparkling bodysuit and an all-green ensemble. Julianne also wows in a gorgeous red gown and a stunning velvet dress. As usual, Derek looks dapper in a number of sleek suits.

Holidays with the Houghs isn’t just a sibling special. Julianne and Derek will be joined by Ciara, 34, and NE-YO, 40. These two talented artists will be bringing the holiday cheer with their performances. Ciara slays in a red coat dress and matching knee-high boots when she steps on stage to sing. Meanwhile, NE-YO will be making us swoon with his performance.

Julianne recently performed her newest duet, “All I Want For Christmas Is Love,” with actor Jordan Fisher, 25, at the Rockefeller Christmas Tree lighting ceremony. The performance was featured on the Christmas In Rockefeller Center special. She also just completed her first season as a judge on America’s Got Talent and released a new single called “Transform.” Derek currently serves as a judge on NBC’s dance competition series World of Dance and recently wrapped his first solo national tour, Derek Hough Live: The Tour.