And then there were four? Anne Hathaway, 37, and her husband, Adam Shulman, 38, were pictured carrying a newboyn carrier with a baby inside, while walking in Connecticut on Sunday, Dec. 8 — leading us to believe she’s given birth to their second child already! This is also the first time Anne has been pictured in weeks. The couple, who first wed in 2012, have yet to announce their joyous baby news, but HollywoodLife has reached out to the actress’ rep for confirmation. This latest addition to their family joins older sibling Jonathan Rosebanks Shulman, who the couple welcomed on March 24, 2016. SEE THE PICTURES HERE.

The Devil Wears Prada star first announced her pregnancy on Instagram in July 2019. Anne’s reveal tugged at her followers heartstrings as it came with a heartbreaking and inspiring message for mothers everywhere. “It’s not for a movie…⁣⁣ #2⁣… All kidding aside, for everyone going through infertility and conception hell, please know it was not a straight line to either of my pregnancies. Sending you extra love 💕”.

Let us see! Anne showed off her baby bump only a handful of times since announcing her pregnancy. The Oscar winner posed with her hand on her growing baby belly in a gorgeous Oscar De La Renta number at the premiere of her Amazon Prime show Modern Love on Thursday, October 10. She then wore a flowy Givenchy ensemble during her appearance on Live With Kelly & Ryan on Friday, October 11.

Feeling so much love this birthday week! I want to thank everyone for the flowers and the books and chocolates and cards and crystals and other incredible goodies and most importantly I want to thank God for giving me a good hair day. It was so, so appreciated #37 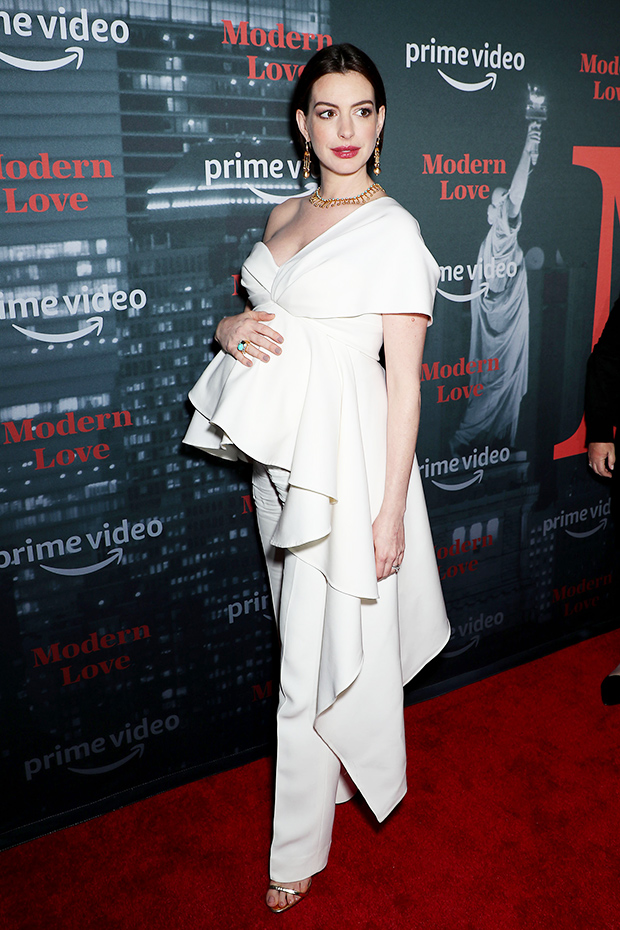 Anne has been very vocal about how different life has been since becoming a mother three years ago. “I quit drinking back in October, for 18 years,” Anne announced during her appearance on The Ellen DeGeneres Show in January 2018. She then reflected on a moment that revolved around drinking and the tasks that motherhood brings, saying “I did one school run one day where I dropped him off at school, I wasn’t driving, but I was hungover and that was enough for me. I didn’t love that one.”

Don’t worry Anne fans, her acting career hasn’t stopped in the midst of her ever growing family! She’s set to appear in several movies in the next couple of years including a leading role in the drama Dark Waters (coming out on November 22, 2019) and The Witches, based on Roald Dahl‘s 1983 classic book of the same name. In the meantime, congrats once again to Anne and Adam on their bundle of joy!

Related: ‘Princess Diaries 3’: Will There Be One? What We Know